For some reason, we, as a society, are fascinated by outlaws – Jesse James, Wild Bill Hickok, Billy the Kid, Bonnie and Clyde. These criminals are romanticized, idolized, and treated as heroes across pop culture. It doesn’t seem to matter that they killed hundreds of people, robbed banks and trains, and, generally, broke the law every chance they got, they are still treated more like folk heroes than anything else. I think that’s part of what makes The Highwaymen such a great film… it looks at the lives of those chasing the criminals and the aftermath of the crime sprees.

Most people know the basic story of Bonnie and Clyde – lovers on the run from the law. The Highwaymen looks at the destruction and chaos they created, the level of celebrity they achieved, and the men responsible for bringing them down. In one scene, the film shows our criminals mobbed by the public in a way that only celebrities, royalty, and the Pope typically see. I assumed that this was a dramatization until the end of the film when archival photos and facts about the funerals of Bonnie and Clyde were shared. I was awestruck with the realization that this was a realistic portrayal of those events.

The film follows two former Texas Rangers who are brought in to apprehend Bonnie and Clyde in 1934. The film tries to stick to most of the facts, but there are a few complaints that have been published about the realism of certain aspects and they do change things up a bit, as movies typically do.. I found it interesting to watch as I was constantly searching the web to verify certain facts. Was “Ma” Ferguson a real politician? Did she really disband the Texas Rangers in 1933? Were they really reformed in 1935? The answer to all of these questions is, ‘Yes.”

In many ways, I feel like this film missed out by not being labelled a western. It really had all of the important aspects of a western, except that it took place in the 1930’s. Two grizzled veterans shaking off the cobwebs for one last ride. Infamous outlaws that no one can catch. Plenty of gunfire and the occasional memorable one-liner.

One place where I think this film really shines is the casting and that may be part of the reason why I felt this film should have been called a western. While my dad may have grown up with the likes of John Wayne and Clint Eastwood. The most memorable westerns from my youth were Young Guns, Tombstone, and Wyatt Earp. The star of Wyatt Earp was Kevin Costner and seeing him play Frank Hamer in this film made perfect sense. He’s long been one of my favourite actors and I think this movie gave him a real opportunity to shine. Similarly, Woody Harrelson does a great job in this film and it shouldn’t surprise anyone… from Cheers to Natural Born Killers to Zombieland, he has always given stellar performances. The supporting cast includes Kathy Bates, John Carroll Lynch, and William Sadler – three actors who always add to the films in which they appear.

I was lucky enough to be home for a visit when this film was released, so I sat down and watched it with my dad. If, like me, you’re in your mid-30’s, you may find this film reminds you of the movies you used to watch with your father when you were younger. This may be another reason it reminds me of a western, it’s a genre my dad has always enjoyed. It’s a simple movie with a solid story, great acting, and without the CGI and over the top effects that show up in most modern films. So, in many ways, this brand new film represents a bit of nostalgia and that always makes a movie more enjoyable.

At the end of the day, this may not be a 100% accurate historical retelling of the story but it appears to get a lot right. The acting is top notch, the story is well written, and the entertainment value is high. If you have a Netflix subscription, there’s no reason why you shouldn’t have already watched this. If you don’t, I would say it’s worth subscribing for a month just to catch this film. If this had been a VOD release, I likely would have purchased it instead of waiting for the rental. It is definitely worth checking out. 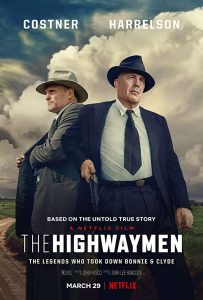 Movie description: The outlaws made headlines. The lawmen made history. From director John Lee Hancock (The Blind Side), THE HIGHWAYMEN follows the untold true story of the legendary detectives who brought down Bonnie and Clyde. When the full force of the FBI and the latest forensic technology aren’t enough to capture the nation’s most notorious criminals, two former Texas Rangers (Kevin Costner and Woody Harrelson) must rely on their gut instincts and old school skills to get the job done.