The Exchange. See it.

That should be my review. It is honestly all that I need to do. Until recently, if you had asked me about the best Canadian coming of age film, I would have likely said it was The Challengers, a CBC production that aired in 1990, a film I recorded and watched so many times as a kid that I’m pretty sure I wore out the VHS tape. That film is the reason why I still, to this day, want to meet Gema Zamprogna. I believe, after seeing The Exchange, that The Challengers may now have a rival. I think my biggest issue with both of these films is that I want to own physical copies for my collection and neither of them are available on DVD or Blu-ray.

The moment I read Tim’s brilliant, evocative and hilarious script I was immediately smitten and inspired by the prospect of making a film that could live alongside movies like Election, Super Bad and Stand By Me as a coming-of-age story that felt simultaneously authentic, revelatory and genuinely laugh out loud.

I think that Mazer has hit his mark. The film is incredible. It also had a very special moment for me as the name of my hometown, Sault Ste. Marie, is mentioned on screen, something that rarely happens. The movie is well done, thoughtful, and highly entertaining. With the right attention, this film could easily stand out in the memories of many just as Stand By Me stands out in my memory. The cast did an amazing job, Mazer did an amazing job, and Tim Long, the film’s writer wrote a script that is out of this world. I love seeing amazing Canadian films and writing these reviews and introduced me to many movies that I likely never would have encountered.

I looked up Long and it is no surprise that he wrote such an incredible film. He’s a writer/producer for The Simpsons, where he has won 5 Emmy awards. Prior to that, he was the head writer for the Late Show With David Letterman, my favourite late night talk show in the 90s. The man is clearly a comedic genius; it shows in the work he has done and The Exchange is no exception. Then again Mazer has worked on a lot of Sacha Baron Cohen’s work and is no stranger to comedy himself. The two are the perfect pair and I hope that we see them work together again.

The film follows Tim, played by Ed Oxenbould who previously played Alexander in Alexander and the Terrible, Horrible, No Good, Very Bad Day, the school “loser”. Bullied, ridiculed, and shunned by his peers, Tim seeks out an exchange student from France to bring culture and sophistication to his life. Instead, he gets Stéphane, Avan Jogia, who is the exact opposite of the friend that Tim was looking for. The two form an unlikely pair and have their ups and downs. In a way, it is an Odd Couple sort of relationship and it works.

The film plays out as most coming of age films do… with ups and downs, laughs and troubles. The key word here is definitely laughs. The film is hilarious and will keep you laughing the entire time. Perhaps more so if you are Canadian, but I think anyone can enjoy this movie. The film follows the rollercoaster that is Tim’s life and I don’t want to say more because I don’t want to spoil a single laugh.

Watch out for very recognizable actors in the film such as Justin Hartley of This is Us fame as gym coach and part-time cop, Rothbauer, and Jennifer Irwin as Tim’s mother, Sheila. Even with these more experienced actors helping out, this film only works because of the chemistry between Oxenbould and Jogia. Whether you are a Friends fan or a How I Met Your Mother Fan, I think you’ll understand when I say that their relationship is akin to Joey and Chandler or Ted and Barney. On screen, they shine and backed up by a fantastic supporting cast and the comedic chops of their writer, Long, and director, Mazer, they bring the story to life.

At the same time, the film has a serious side and it is worth noting. The film points to the quiet racism that bubbles just below the surface of most Canadian small towns. It shines a spotlight on how that friendly veneer can quickly slip away when someone who looks or sounds a little different comes around. It is something that isn’t often talked about, something that is swept under the rug in the hopes it will be forgotten. This film brings that to light and I think it does so in a way that is reflective of our small towns. I’m sure that someone reading this will say, well that film is set 35 years ago, it is different now, but I think social media has made it pretty clear that it isn’t. So, it is great to see a film address it in the way that this movie does.

At the end of the day, I’ll leave you with this advice… watch the movie. It is great.

The Exchange is available On Demand and Digital on July 30. 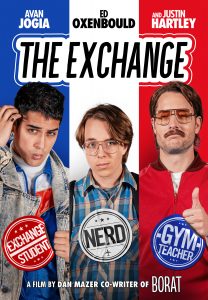 Movie description: A socially awkward but highly enterprising teenager decides to acquire a "mail order best friend"; a sophisticated exchange student from France. Instead, he ends up importing his personal nightmare, a cologne-soaked, chain-smoking, sex-obsessed youth who quickly becomes the hero of his new community