The latest offering from the Escape Plan franchise is definitely its weakest outing yet, but that doesn’t make it a bad film, it just doesn’t make it a good one. The first film in the series was great, I recommended it to everyone and the second one was decent, but this one was off and I’m not sure exactly what made me feel that way. I definitely can’t pinpoint any specific reason.

The film is exactly what you would expect from a mid-90s direct-to-VHS that would have had one or two copies sitting on the back corner of the Blockbuster new releases wall. Those are my kind of movies… the overly macho, testosterone filled action flick is one that I’ve always enjoyed as a mindless afternoon film. This one just didn’t do it for me.

Let’s talk about the things I did enjoy. The first, of course, is Sly. I will always watch a Sylvester Stallone movie. There are some I haven’t seen, but they’re all on my iTunes Wishlist waiting to be watched. At 73 years old, his fight scenes are still awesome to watch. I’m willing to bet they require a bit more trick camera work than they did 30-40 years ago, but they are still classics. I also really enjoyed the setting for the film. The old prison was pretty unique and a great twist from the ultra-modern facilities used in the first two films. Finally, Dave Bautista. I feel like that’s enough of a statement, but Bautista has been a great addition to the acting world since he first took a role 13 years ago. Seeing him on screen is enough of a reason to smile while watching a film.

Then there’s the bad. The first in 50 Cent, I just don’t find him believable in his role. I liked him in the second Escape Plan film, but in this one his character felt like an afterthought designed to fill a few empty gaps. Another issues was the plot. The film had a number of holes. It’s one of those movies where everything conveniently happens without any real explanation or reasoning. Finally, the film was short and rushed. I think this feeling would have been remedied if the plot holes were resolved. The film needed more of an A to B to C to D storyline, when, at times, it felt like we went from A to C to G.

One other thing that I didn’t like was the treatment given to Jaime King’s Abigail Ross. They created the moment to shock the viewer, and it works, but it felt unreconciled as the film progressed. I was honestly expecting a reconciliation at the end of the film, but it never happened. I don’t want to spoil the film for anyone thinking about watching it, but I feel like they picked an over the top way of pushing the film forward. Then again, the women in this film seem to be easily cast aside. I found it very odd that Lydia Hull’s Jules just sort of disappeared from the film. She’s there to add the occasional line of dialogue and she’s brought along on the siege of the prison, then she just sort of disappears and is forgotten about when they start writing all of the action. Both King and Hull were definitely under-utilized in this film, but at least King’s character made sense in the progression of the film, even if it was a choice I don’t agree with.

At the end of the day, unless you’re a completionist looking to see all of the Escape Plan films or your a Stallone/Bautista fan like I am, you probably aren’t planning of watching this. They did leave the door open for a 4th film that puts Bautista in the driver’s seat and I am eager to see that, but this film probably isn’t for most people. That said, if you’re bored, this will definitely fill the time in an entertaining way. 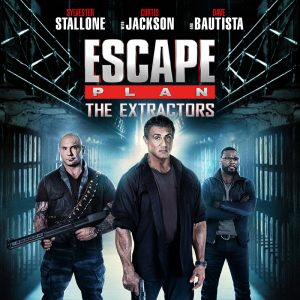 Movie description: Screen legend Sylvester Stallone kicks this explosive action tale into high gear. After security expert Ray Breslin (Stallone) is hired to rescue the kidnapped daughter of a Hong Kong tech mogul from a formidable Latvian prison, Breslin’s girlfriend (Jaime King) is also captured. Now he and his team, which includes Dave Bautista and Curtis “50 Cent” Jackson, must pull off a deadly rescue mission to confront their sadistic foe and save the hostages before time runs out.