I have come to absolutely hate trailers. Over the past decade trailer editors have included more and more spoilers in the trailers. At the same time, there are so many good trailer editors out there that sometimes the trailers look amazing and the film is a let down. That’s what happened for me with Censor. The trailer looked amazing, but the movie just wasn’t the same. In fact, I find it hard to describe the movie even after having seen it. I feel like it was an incomplete story, only part of what was happening was explained and so much of the narrative was left unsaid. Unfortunately, it needed to be said, as you couldn’t just fill in the missing pieces.

The movie also had a slow burn that I just wasn’t expecting based on the trailer. With some movies and TV shows, a slow burn is exactly what you want. It works well for dramas and mysteries. It even works well for thrillers. The problem is that those stories have closure, something that this film lacked. I don’t feel we got a conclusion and part of that might be tied to how much was left unsaid.

In the film, Enid (Niamh Algar) is a film censor, watching over the top movies and assigning ratings and suggesting cuts. It is not a job for the faint of heart and, honestly, it’s not a job that I ever thought about, but it seems like it would be an interesting albeit disturbing profession. I think the best word to describe Enid is likely mousy. Outside of her work, Enid is pretty much a homebody, occasionally speaking to her parents, but it seems like that is her only outside contact. Even her contact with her parents is limited due to the loss of her sister when she was younger, a sister that went missing but Enid still holds out hope, even as her parents complete the paperwork to have the sister declared dead.

This declaration, combined with a film that comes into her screening room, pushes Enid into a full on breakdown and the lines start to blur between memory, reality, and fiction. Unfortunately, the film doesn’t do a great job of showing us which is which, so we simply find ourselves lost in Enid’s breakdown, unable to decipher the story. This is the part that really ruined the film for me. I thought the second half of the film was great, but I wanted to know what was going on or, at the very least, get some closure at the end. Unfortunately, we are denied that.

It poses this idea that as humans we are so afraid of ourselves, like in some people’s minds we are just one step away from becoming a murderer, as though you could just watch a film and your moral compass is completely thrown out of the window. CENSOR was a way to dive into some of these ideas – the idea of the moral compass, and how that fear of ourselves can be the most dangerous thing of all.

I found Bailey-Bond’s director’s notes interesting. I agree with a lot of what she said and I think the film could have given us an interesting look at the concept described above. Unfortunately, I think it misses the mark. The slow burn at the start is going to cause a lot of viewers to turn away or do other things to distract themselves from what feels like monotony. In a world of cell phones, you need to hook the viewer right away and there was nothing to hook me in the first half hour (or more) of the film. I stuck with it, and found myself hooked in the second half. The horror elements, the death scenes, the characters all made the film rather intriguing and then it ended. I feel like someone handed me a book with the final 30 pages torn out. It wouldn’t have taken much to wrap things up and give us the conclusion that a film like this needs.

I won’t say not to watch the film, because I did enjoy a decent chunk of it… I will caution you that the start is slow and the ending is lacking, but the middle has some really awesome content.

Censor is out in theatres on June 11 and On Demand June 18. 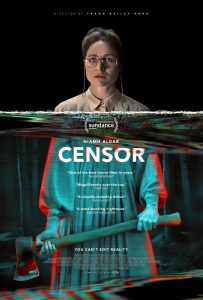 Movie description: Film censor Enid takes pride in her meticulous work, guarding unsuspecting audiences from the deleterious effects of watching the gore-filled decapitations and eye-gougings she pores over. Her sense of duty to protect is amplified by guilt over her inability to recall details of the long-ago disappearance of her sister, recently declared dead in absentia. When Enid is assigned to review a disturbing film from the archive that echoes her hazy childhood memories, she begins to unravel how this eerie work might be tied to her past.