The Darkest Minds is a bit of a mystery to me. I enjoyed the movie. It’s not the greatest movie that I’ve ever seen, but it was entertaining. The idea of a plague wiping out all kids and those that survive end up with special powers that put them into one of five categories is interesting. It felt like an interesting concept, if I was younger, I’d probably want to read the books. It has gotten nothing but negative reviews though, with some people attempting to compare it to other film adaptations of books targeted at young adults. One of the comparisons I saw was to Twilight. I have seen the Twilight movies and they are not good, I feel that The Darkest Minds was a superior movie. Clearly audience support disagrees with me, as do critics… but I was surprised to see this movie treated so negatively.

There was a high point and a low point for me in the entire process. The high point, beyond the interesting story, was the cast. There were a number of recognizable faces in smaller roles (since the teens were the focal point of the movie). I enjoy movies that do this and respect the actors that are willing to play a bit role in a movie where most of the primary cast members are unknown. On the low point side, it was the trailer. My wife and I watched the trailer 3 or 4 times and she always said “No, I have no interest in this.” Those responsible for the creation of the trailer did the movie a disservice and shouldn’t be allowed to ever make trailers again. When I sat down and watched the film, my wife joined me and went, ‘Wait! What is this? Why didn’t you show me this trailer.” Other than the same faces, the trailer does nothing to introduce the story of the film.

The concept of the movie is simple. A plague wipes out kids, but those that survive develop powers – Pyrokinesis, Telekinesis, Electrokinesis, Mind Control, or Super Intelligence. They are sent to prison camps if they are caught because the adults consider them to be dangerous, but there’s a resistance fighting back. This story followed a girl with mind control powers who manages to survive inside a prison camp until an escape opportunity presents itself and we follow her on that journey. There are a few really interesting moments and the movie was entertaining enough to keep me hooked until the end.

Given that this film was part of a series and the way the movie ended, I would really like to see the next film in the franchise made, simply to know where the story goes. If you’re bored on a Sunday afternoon, this might just be the right movie to watch. 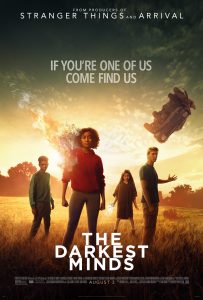 Movie description: From producers of Stranger Things comes an empowering tale of teens who mysteriously develop new abilities and are declared a threat by the government. Ruby, one of the most powerful young people anyone has encountered, escapes and joins a group of runaway teens seeking safe haven. Soon, this newfound family realizes that collective power is needed to take back control of their fate and save future generations.

Back at the start of November, I reviewed Triggered. If you haven’t seen the film or read the review, I’d recommend you do that first as this post may contain spoilers. After reviewing the film, […]