The Hallmark Channel pumps out Christmas movies at an amazing rate. I’ve been watching them whenever I can, the latest of which was Switched for Christmas starring Candace Cameron Bure in both lead roles. The first role is that of Chris Dixon, a small town art teacher raising two children, while the second, Kate Lockhart, is the exact opposite, a single, city dwelling professional. The twins’ father (Walter Platz) lures the sisters to a lunch and reminds them of a promise they made to their deceased mother and leaves the two to have lunch together. The sisters disdain for each other is clear, they both feel that the other has an easy life, which ultimately brings us to them swapping roles to prove they could each do a better job than the other.

This is, of course, a romcom, which means we need to introduce romance and faux conflict. The conflict comes via an agreement the sisters make to avoid romantic encounters. Cue the romance! Kate, pretending to be Chris, ends up working with Tom (Eion Bailey) to plan the school’s winter carnival, a major event for the entire town. Coincidentally, when in high school, Kate went on a date with Tom, but it didn’t end well and she never got closure. Tom, not recognizing the name Chris Dixon, has no idea of the history the two share. At the same time, Chris, working as Kate, falls head over heels for Kate’s colleague Greg (Mark Deklin). I was definitely a bigger fan of the Chris/Greg relationship, it was much sweeter and I loved watching the two of them fall for each other. The Kate/Tom relationship felt more forced and less authentic… like Kate was trying to capture what she’d once had, rather than finding something new. This was even more awkward because Tom had no idea they had a past.

In the end, their covers are blown and they must explain themselves to their new loves (and introduce themselves). The film concludes as you would expect, giving you that warm, fuzzy feeling that you patiently wait for with every romcom.

Ultimately, we have a really cute body swap romcom that ties in nicely to Christmas. Sequels don’t seem to be The Hallmark Channels cup of tea, but this is one where I would have loved a follow-up. Given that this was released in 2017, they could have done a 2018 movie about the sisters, both happily married to their respective partners, finding a new wife for their father. It would have given us insight into where the story went and created a brand new story for viewers to enjoy.

I recommend checking this one out if you haven’t already. This is one where my wife, who is anti-romcom, watched with me and also enjoyed it, so anyone can give this movie a go. 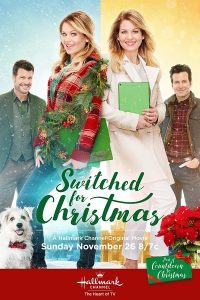 Movie description: When identical twin sisters are stuck planning their respective Christmas parties, they're convinced the grass is greener on the other side. Deciding to swap lives for the holiday, the lessons they learn along the way may turn out to make this the best Christmas ever.

Mr. Jones is a long, slow film… not MCU long, but long none-the-less. The film, advertised as a biopic, tells the story of Gareth Jones, a Welsh journalist that broke the news of Holodomor and […]