What happens when you take a serial killer slasher flick and cross it with a drama about parents struggling to raise a newborn? You get Bloodline, writer/director Henry Jacobson’s first feature film. I enjoyed the film, but it felt like a lot of the ideas were straight out of Dexter and Mr. Brooks. Both of those looked at serial killers outside of the typical confines of the genre and covered a lot of the material that I feel like Bloodline rehashes, but Bloodline does it with a worse soundtrack. Which is important to call out, the score for this film is pretty bad. It felt like the composer asked how they could rip off Stranger Things but also make it sound bad, which they somehow managed to accomplish.

With that said, I don’t want this review to be entirely negative because, as I mentioned, I enjoyed the film. The practical effects were well done and the casting was great. Seann William Scott can do no wrong; from American Pie and Dude, Where’s My Car? when I was in my teens to Goon, Goon: Last of the Enforcers, and Just Before I Go more recently, I’m a fan of pretty much everything he does. Dale Dickey is an instantly recognizable favourite in any movie. This was the first movie that I’d seen Mariela Garriga in, but I’ll be looking for more films with her in the future, she did a great job portraying a new mother struggling with her sanity with a crying baby. Speaking of a crying baby, if the goal was to drive the viewer crazy with the constantly crying baby, I’d say mission accomplished. It’s strange, but having that near constant, very loud cry definitely heightened the movie. I can’t say exactly how, but it made it feel much more emotionally driven.

The premise of the movie is pretty straightforward and you’ve probably already assumed quite a bit of it based on my mention of similar concepts above. We have a serial killer who is also dealing with a family situation. In this case, that family situation is a newborn child. According to the director, Jacobson.

“A serial killer has a baby, and hilarity ensues.” That was my elevator pitch for BLOODLINE, and that is where my co-writer Avra Fox-Lerner and I started.

I’m not sure that hilarity was part of this film. Similarly, the trailer made me believe that there would be a lot of questioning if the serial killer tendency is inherited, but I didn’t really see that as part of the film either. There are some interesting twists and turns, but not the ones I expected based on the mention of hilarity and the trailer. I won’t spoil them though because they are worth seeing. I will, however, somewhat spoil one scene. During a Q&A, Jacobson was asked, “Do you have any memorable anecdotes during production?” His response?

Two words. Prosthetic Vagina.
I’m pretty sure we put the entire crew off having children for years to come.

I’m glad he addressed this because the scene in question was something I wasn’t expecting and I was definitely too squeamish to watch the entire scene. I had to keep looking away. The movie did a great job of bringing together the non-horror dramatic elements of parents struggling with a newborn and the horror aspect of a typical slasher flick. This is definitely something that makes the movie somewhat unique, although, it is, conceptually, in the same vein as the material mentioned above. I think that Jacobson did a great job of summing up his goals.

There are a lot of horrifying things about parenthood, about family in general. There’s a lot of fear; fear of losing your family, or of irrevocably fucking up your children in the same ways you were fucked up as a child, fear of confronting the darkest secrets – the unsaid things that every family (to some degree) hides from themselves and each other. I didn’t want to make another serial killer movie about a psychopathic white guy who kills women. I wanted to make a film that embraces, even indulges in, the tropes of the genre – blood, seemingly gratuitous nudity, suspense, violence, even more blood – all while examining one of the most universal human experiences; family.

I’m not a parent, so I can’t say for certain, but I feel like he did a good job of creating this on screen. It was probably helped by the fact that his wife was pregnant while he was co-writing the script and his son was six months old when they started shooting.

If you enjoyed Dexter, I would recommend checking out this film, just keep the music in mind and understand that it will be painful to listen to, other than that, you’ll be watching a decent film. Bloodline is available today in theatres and on digital / demand. 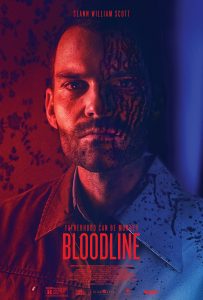 Movie description: Evan (Seann William Scott) values family above all else, and anyone who gets between him, his wife, and newborn son learns that the hard way. But when it comes to violent tendencies, it seems the apple doesn't fall far from the tree.