When I was looking at upcoming Netflix films, I noticed The Boy Who Harnessed the Wind in the list and was intrigued by the title, but after reading the description, I wasn’t sure it was a film that I would enjoy. It simply isn’t the type of film I normally watch. I tend to shy away from films ‘based on a true story’, unless they are based in comedy or action… or my wife really wants to see them. I decided, however, to give this one a try after reading the positive reviews that came from the Sundance screening.

The film tells the story of William Kamkwamba, played by Maxwell Simba, who lives in a small village in Malawi. When his village is facing a famine and everyone is leaving, he comes up with a way to build a windmill to power an old water pump in order to supply water to their fields and allow for a second harvest, saving his village. A number of factors play into the events of the movie (again, a true story). First, the events take place at the same time as 9/11, as we hear in an early news broadcast and again later as an explanation for increasing costs due to the impact on the global market. At the same time, we have land owners in desperate need of money, selling the trees on their land that prevent flooding. Having visited the Anthropocene exhibit at the Art Gallery of Ontario only a few months ago, the impact of this decision was not lost on me and I cringed as soon as I saw the clear cutting begin in the movie, knowing it couldn’t lead anywhere good. Finally, a corrupt government refused to help it’s citizens, leaving them to starve in the streets.

The film was written and directed by Chiwetel Ejiofor, who also starred as William’s father, Trywell, and adapted from the book of the same name written by William Kamkwamba and Bryan Mealer. Ejiofor does a brilliant job bringing the story to life on the big screen. I found myself drawn into the movie, actually leaning in as I watched the film, waiting to see what would happen next. As I said, this isn’t normally a film I would watch, but I’m glad I did. One of the greatest things about launching this website is that it has driven me to watch movies I normally wouldn’t consider and to read the background on films. I was impressed to learn that this was the first film made in Malawi and that they worked in English and the local language, Chichewa, in the manner in which they are spoken in the area to maintain authenticity. For those that aren’t big fans of subtitles, you can take solace in the fact that only a portion of the film is subtitled and it is not at all taxing to follow along with the language transitions, instead it adds a lot of depth to the film.

It is such an inspirational film that gives insight into a culture I was not familiar with and a way of life that I’ve never experienced. I was fascinated and, at the same time, terrified that so many people live like this given the modern technology available to us. That a single village could thrive with a single windmill and it falls upon a 13 year old boy to provide that is a real statement about the world we live in. I think that producer Andrea Calderwood summed it up best.

The thing that struck us really strongly about this story is the universality of it. It’s a family with hopes and dreams and aspirations ‑ and particularly William, who is a bright kid who knows that he’s got huge potential but he’s got all these barriers in his way, and yet he finds a way to overcome them. That’s what’s so inspiring about this story.

If you’re in the mood for something different from the average movie, something that gives you a glimpse into the world outside the Hollywood blockbuster, then I highly recommend checking out The Boy Who Harnessed the Wind when it premieres on Netflix on March 1. 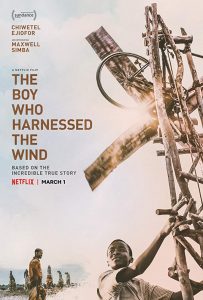 Movie title: The Boy Who Harnessed The Wind

Movie description: Adapted from the bestselling book by William Kamkwamba and Bryan Mealer, The Boy Who Harnessed the Wind follows 13­year ­old William Kamkwamba (newcomer Maxwell Simba) who is thrown out of the school he loves when his family can no longer afford the fees. Sneaking back into the school library, he finds a way, using the bones of the bicycle belonging to his father Trywell (Chiwetel Ejiofor), to build a windmill which then saves his Malawian village from famine. The emotional journey of a father and his exceptional son at its heart, William’s tale captures the incredible determination of a boy whose inquisitive mind overcame every obstacle in his path.