Something about The Rental spoke to me the first time I read about it. Maybe it was that it was that it was Dave Franco’s directorial debut that drew me in – after all, I’ve always been a fan of his acting. More likely, however, it was the inclusion of Alison Brie (Community) and Jeremy Allen White (Shameless), two of my favourite actors that really made me want to see the movie. It turns out that the remaining cast, Dan Stevens (Downtown Abbey) and Sheila Vand (Snowpiercer) are great actors as well, which made it easy to watch the film.

Out of the gate, before I even watched the movie, I was bothered by the fact that everyone was calling this a horror movie, when it sounded to me like a thriller. I sat down to watch it and it belongs 100% in the thriller category. I get why people want to assign the horror label and it definitely has horror elements, but every good thriller draws from those horror elements. I was on the edge of my seat, my heart was racing, I wanted to know what would happen next. That’s a thriller. Sure, it was creepy and there were things that make you go jump in the night, but I don’t feel it crossed over enough into the horror genre to justify calling it that. I was happy to learn that Dave Franco also sees the film as a thriller.

The country is as divided as it’s ever been and no one trusts each other, yet we trust staying in the home of a stranger simply because of a few positive reviews online. This felt like a good jumping off point for a grounded thriller, which could tap into real world fears. Nothing is scarier than something that feels like it could actually happen.

The movie is about a pair of couples that go away for the weekend to a rental house (think Airbnb) and things become creepy. Someone is spying on them and everything they do in the house. Is it Taylor (Toby Huss), the creepy, racist property caretaker? Is it something supernatural in the fog? It’s worth noting that the film could easily be described as “fog-filled.” According to Franco, they had massive fog machines and a “lawnmower device that would spit out fog while you ran with it.”

The thing that makes this movie so creepy is that it feels like reality. It could simply be you and your friends going on a weekend getaway. My day job is in cybersecurity and you hear people theorize about horror stories all the time. My wife and I still exclusively use hotels because the concept of house sharing is just a little too creepy and invasive for our liking. In fact, after watching this movie, my wife’s first comment was, “Well, now I’m definitely never staying in an Airbnb.” This film scares you in a way that’s real, it keeps you on the edge of your seat, wondering what is happening.

Before we wrap this up, I do want to call attention to Jeremy Allen White. The man is an acting phenom. His performance in this film is incredible. Everyone does a great job, but he stands above them all.  Dave Franco lucked out casting him for the role of Josh.

The Rental is available in select Drive-Ins, Theatres, and On Demand on Friday, July 24. 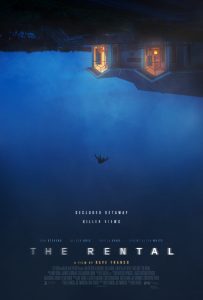 Movie description: Two couples on an oceanside getaway grow suspicious that the host of their seemingly perfect rental house may be spying on them. Before long, what should have been a celebratory weekend trip turns into something far more sinister, as well-kept secrets are exposed and the four old friends come to see each other in a whole new light. Alison Brie, Dan Stevens, Jeremy Allen White, and Sheila Vand star in this unnerving and sophisticated debut thriller from Dave Franco (NEIGHBORS, IF BEALE STREET COULD TALK, THE DISASTER ARTIST).

My wife and I finally sat down to watch Glass, a film that I’ve been looking forward to since it was announced. We saw Split in theatres and I was shocked by the tie-in to […]