Slash/Back is a personal film. It deals with teenagers processing shame in their Indigeneity as I did when I was growing up. It channels the stories I wished I would have seen when I was a child in love with movies.

Slash/Back is a film that I’ve wanted to see since I first heard about it. A Sci-Fi film made in Nunavut with an Inuit cast – how could that be anything other than intriguing? On top of that the film’s director and co-writer, Nyla Innuksuk, has written for Marvel and co-created Snowguard alongside Canadian comic legend Jim Zub. I love Sci-Fi, Canada, and Comics… how could I not love this film?

The film title is a play on the idea of a clap back. That if somebody is mistreating you, you will defend yourself quickly. These teenagers are from a place where you learn how to take care of yourself and your family, so when the aliens attack, they are ready.

I chose to morph the credits from Inuktitut to English because Inuktitut is the language spoken most fluently by Inuit in Nunavut. The title sequence for Slash/Back is a special one for me because there is something very familiar about seeing kids on bikes in their hometown in movies, but this isn’t the Goon Docks or Southern California. This is Nunavut, one of the most remote and beautiful places on the planet. I think it’s important to be able to see yourself in different types of stories, and this is primarily a movie for Inuit.

Quite honestly, my only complaint about the film isn’t even a valid complaint. Slash/Back makes me think of backslash, but the name uses a forward slash. I say it isn’t a valid complaint because only one is really used as punctuation (forward slash), which is likely why it was used here, however, I can’t help but think that it would have been cool to see a backslash in the name. Enough of my minor complaints, let’s talk about how amazing the film is.

The film stars Tasiana Shirley, Alexis Vincent-Wolfe, Nalajoss Ellsworth, and Chelsea Prusky as four Inuit teens fighting off an alien invasion. All four actors are incredible, but Shirley as Maika and Ellsworth as Uki are the standout stars of the film. Their performances are on par with any experienced actor. The two young actors also had, by far, the most interesting characters in the film  – Maika is the daughter of a great hunter and Uki is fearless, making them a great pair to team up and take on aliens. Everyone else seems to appear in a supporting role to these two and they carry the story brilliantly.

The film centres around these four teens staving off boredom in Pangnirtung, a small hamlet of 1500 on Baffin Island in Nunavut. While out killing time one day, they come across a polar bear that is walking quite unnaturally. When it attacks the younger sister of one of the teens, they shoot it to save the sister, drawing a black blood from the “animal.” This sets the stage for everything to come, ultimately leading to a showdown between the alien invaders and Earth’s teenage defenders in Pangnirtung.

As viewers, we are aware of the aliens before the films cast due to an awesome cameo from recognizable Canadian actor Kristian Bruun at the start of the film. Bruun is most recognizable from his role on Orphan Black but he seems to pop up in a lot of brilliant Canadian content –Red Rover, Tammy’s Always Dying, and Carter to name a few.

One of the aspects of the film that I enjoyed was the transition between English and Inuktitut. I enjoy subtitled films, especially when they help to immerse the viewer in the culture of the film. However, there is one scene at the end of the film where Inuktitut is spoken but there are not subtitles. I’m sure the lines are insignificant as it involves a few sentences between Maika’s father and unnamed characters, but I would have liked to have known what was said. Since it didn’t impact the film at all, it isn’t an issue, but when the translation was handled so well throughout the rest of the film, it felt like an oversight.

This is a film that everyone should watch. It is well acted, well written, and well directed. It is a small budget production that delivers just as much entertainment as any Hollywood blockbuster, but it is filled with a lot more heart. Innuksuk talks about the familiarity of seeing kids on bikes in their hometowns in movies in the quote I shared above. This stood out to me while watching the film before I had ever read Innuksuk’s quote. It reminded me of my favourite childhood Canadian film, The Challengers and my favourite childhood Sci-Fi film, E.T. – in both films, bicycles play a critical role and they felt just as important in Slash/Back.

Slash/Back is now available in theaters and on VOD/Digital. I was also on an Air Canada flight this week and noticed that it is, at the time of writing, available via their in-flight entertainment system. 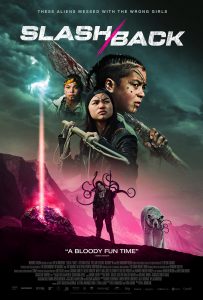 Movie description: Set in Pangnirtung, Nunavut, a sleepy hamlet nestled in the majestic mountains of Baffin Island in the Arctic Ocean, SLASH/BACK opens as the village wakes up to a typical summer day. No School, no cool boys (well... except one), and 24-hour sunlight. But for Maika and her ragtag friends, the usual summer is suddenly not in the cards when they discover an alien invasion threatening their hometown. These teenagers have been underestimated their whole lives but, using makeshift weapons and their horror movie knowledge, they show the aliens you don't f*** with the girls from Pang.

Whenever I see Charlie Hunnam or Morena Baccarin in the cast list for a film or show, I know I’m going to watch it. Sons of Anarchy and Firefly were two of the best shows […]

Lately, I’ve found that movies irritate me. When a film ends, I can see the brilliance that the writer put on paper. I can tell exactly what emotions the director wanted to evoke. When I […]