It’s hard to dislike a solid action flick, particularly when they incorporate the elements of a thriller to keep you on the edge of your seat. That’s exactly what Section 8 gives us – a fun 98 minutes that keeps you guessing. I’ve seen it proposed that the film fits firmly in the thriller genre, but I disagree with that. It is pure action with just an edge of thriller to keep the action averse interested.

The setup is simple – military hero crosses the wrong people and loses his family, his retaliation is what kicks off the story. The concept is not new. Action stars of the 80s and early 90s made names for themselves on this type of film. It’s the type of thing that we see over and over again, so you always need a fresh element to keep the viewer watching, or at least, that’s what writers and directors seem to think. As a fan of the classic 80s action flick, there’s only a couple of things that I need – cheesy but not too cheesy acting and a good enough budget that it doesn’t look like it was filmed in a basement by a couple of 14 year olds in the mid-90s. Personally, I don’t need my action films jazzed up, but I did enjoy the extra effort spent to keep this movie interesting. I think that it really paid off.

While the film has a solid story and it looks good, it is the cast that really brings it together. I’m a fan of everyone in Section 8 and they really come together to give us a great action movie. Let’s start with old school credibility with Dolph Lundgren and Mickey Rourke. These guys are legends and give excellent performances – they may not be award worthy, but they’re exactly what you want in a movie like this. Scott Adkins reminds me a lot of Frank Grillo when I see his role choices – he’s filling the shoes of former action greats as they start to age out of their roles, and he’s doing a damn good job of it. Dermot Mulroney has range, so much range. The only genre I don’t think I’ve seen him in is horror, so I really hope his upcoming appearance in Scream 6 isn’t just a cameo. I think he does a great job across the board and he’s always a pleasure to watch. Finally, the star of the film, Ryan Kwanten, an actor who doesn’t get enough recognition for his time on True Blood. There are so many other cast members who are constantly discussed, but Kwanten’s performance was solid across the series and I don’t feel he gets enough credit. He’s also had some fun movies including The Hurricane Heist (which I’m not ashamed to admit I’ve watched multiple times) and Supercon (which I own on DVD). He gave an excellent performance in this film as Jake Atherton, a man struggling with the loss of his family and a shitty situation.

As I said, it is an uncomplicated story… the type of movie where you can sit down, turn off your brain, and just enjoy yourself without thinking too much. There’s a few small twists and turns, but nothing that is overly confusing… just flipping the script to make sure you’re still paying attention. It was a fun watch and I found myself completely drawn into the film. For those 98 minutes, the outside world ceased to exist and I was completely distracted. I really appreciated this as life can be stressful and this let me escape that stress and just have fun in a film.

Section 8 was released in theatres and on AMC+ on September 23. 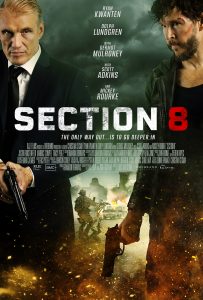 Movie description: In SECTION 8, after avenging the murder of his wife and child, a former soldier is sent to prison with a life sentence. He’s given a shot at freedom when a shadow government agency recruits him for an off-the-books assignment, and he soon realizes Section 8 isn’t what it seems.

The Courier tells the true story of Greville Wynne, played by Benedict Cumberbatch, a businessman recruited by MI6 to act as a courier between them and a high-ranking GRU officer. The film was well done […]