Semper Fi tells a pretty simple story about two brothers, but the subtext of this story is pretty compelling. I think that it will resonate with a lot of people, I know that it did with me. At the crux of the story, we have a group of friends that are Marine Corps reservists, including Cal (Jai Courtney) and his younger brother Oyster (Nat Wolff). Oyster is attacked in the washroom of a bar by two guys and, while defending himself, accidentally kills on of his assailants. Due to his history and shady courtroom dealings, he is found guilty of murder and, while he serves a prison sentence, his brother and friends are called to active duty and sent overseas. While the story seems straightforward; the loyalty, friendship, and bonds that are formed between this group leaps off the screen and really moves you.

This is a film in which the three acts are much more pronounced than usual. We have the setup of the story; the friends at home working regular jobs while in the reserves. The second act involves Oyster’s time in prison while the others are serving overseas. The final act sees the Marines come home and the conclusion of the story. In the first 10-15 minutes of the film, I wasn’t fully convinced I was watching a movie I wanted to see. It felt like frat boys causing a ruckus, but the characters ended up winning me over. While the story was about guys who were a little too rowdy, they clearly loved each other. They supported each other and showed just how powerful friendship can be.

This is where I think the movie will resonate with others. There are plenty of articles these days about the changes in society, primarily around technology, and how these changes impact our ability to from friendships. I’ve had conversations with friends in the bar over this topic. You have work colleagues, you may have a few college or high school acquaintances, but for most people, you don’t form the meaningful friendships in adulthood the way you did in your youth. Work, family, and many other things make it more difficult. Technology just makes it harder. Try and find a group of people at a restaurant or bar without their phones out, it’s a rare sight these days. I think that’s why this movie is so appealing, it shows that bond between friends that everyone wants and so few actually find. These are childhood friends who have stayed together through everything in their lives and rely on each other during the most difficult points in their lives.

I don’t want to ruin the third act, because it is the ultimate showing of love, loyalty, and friendship, so I will leave you with this. I realize this review is shorter than most but I think that speaks to the basic nature of the film. You get a solid story with a great ending and you get a lot of emotion that you wouldn’t normally expect from a film of this type. I saw the cover art for this movie and was expecting an amazing action flick, instead I got a great drama that actually brought tears to my eyes with just enough action included to keep it in that category. I think it’s hard to watch this movie and not appreciate the underlying message.

I’ll leave you with a few words from the film’s director, Henry-Alex Rubin,

From the outside, the film may seem like an action thriller, but in watching it what you’ll really find is a meditation on the emotions and struggles of a group of friends who grew up together. This film is my love letter to friendships.

If you were to open me up and peek inside, I am made up of every single movie I’ve ever seen that moved me or made me cry (The Outsiders, Goodbye Mr. Chips, Deer Hunter, Husbands, The Searchers, to name some). So as a rule, I feel that if you’re asking an audience to take the time to watch a movie you’ve made, you owe it to them to move them on some level. It’s been the through line of my career and the films I’ve chosen to make. Even though it is a genre film, I believe viewers will walk away having felt something watching this film. That was my goal. 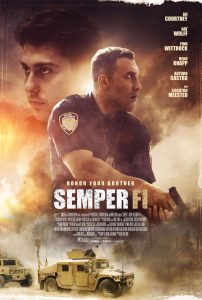 Movie description: Cal (Jai Courtney) is a by-the-book police officer who, along with his close-knit group of childhood friends, makes ends meet as a Marine Corps reservist. When Cal’s reckless younger half-brother, Oyster, is arrested after a bar fight and given an unfair prison sentence, Cal – driven by his loyalty to family and fierce code of honor – fights for Oyster (Nat Wolff) in this gripping tale of brotherhood and sacrifice.

Midnight in the Switchgrass feels like it should be a good movie… after all it’s a thriller with Bruce Willis and Megan Fox. I’m a fan of both actors and I’m a fan of thrillers. […]