My editor, aka my wife, is not a fan of action flicks. When an action film shows up for review, it is difficult to get her to read the reviews I write and even harder to get her to watch the film. Based on the trailer, I didn’t have high hopes that she would enjoy Jolt, but she still sat down and watched it with me. She loved it. I have to say that I’m with her on this one completely. Jolt ended up being a great film that was highly entertaining and a lot of fun to watch. It was dark, funny, and filled with action. Honestly, the worst part of the film was the trailer. They say that a trailer can make or break a film and, in this case, I don’t feel like the trailer did the film justice.

One of the more interesting aspects of this film is the number of genres they were able to include. Lindy (Kate Beckinsale) is clearly on a revenge mission and we get a gender bent take on the classic action film where our hero takes on the world to avenge a fallen lover. At the same time, we get the amazing psychologist/patient interactions between Dr. Munchin (Stanley Tucci) and Lindy. That isn’t the end of it, as we get the buddy cop team of Detectives Vicars (Bobby Cannavale) and Nevin (Laverne Cox). The final piece of the puzzle is the flirtatious nature of the relationship between suspect (Beckinsale) and investigating officer (Cannavale). I think this is what really keeps the film interesting. Typically, these revenge action flicks are very one dimensional, but with this one there are so many things happening that the film flies by while keeping you highly entertained.

Beckinsale, for me, will always be Sara Thomas in Serendipity, but she was equally amazing in the Underworld franchise. I feel like this movie blended the best of a number of her characters, allowing her to really flex her acting chops and give us one hell of a performance. Tucci is an actor that always amazes me. I always underestimate him and he always brings so many layers to his performances that I really need to start recognizing him for the brilliant actor that he is. I also want to go back and rewatch his work from the 90s, I feel like I’m missing a number of great performances.

In the film, Lindy has a rare disorder that gives her strength, speed, and plenty of anger. She’s able to harness this to get her revenge, but she’s also not completely in control and a special device, designed by Dr. Munchin allows her to shock herself and rein in her anger. This allows her to live a “normal” life (there’s definitely nothing normal about it) and, with a push from Dr. Munchin, she tries her hand at dating. She quickly falls for the first man she dates and, just as quickly, he is murdered. This sets Lindy on a quest for answers and revenge. She wants to hurt those that have hurt her and she manages to do just that with a heavy dose of dark humour that tempers the action. At the end of the day, the most interesting aspect of the film is the unexpected setup for a sequel. I feel that we’ve been prepared for a great franchise with this first film and I look forward to seeing where it goes.

Jolt was released on Prime Video on July 23. 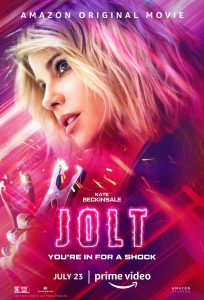 Movie description: Lindy is a beautiful, sardonically-funny woman with a painful secret: Due to a lifelong, rare neurological disorder, she experiences sporadic rage-filled, murderous impulses that can only be stopped when she shocks herself with a special electrode device. Unable to find love and connection in a world that fears her bizarre condition, she finally trusts a man long enough to fall in love, only to find him murdered the next day. Heartbroken and enraged, she embarks on a revenge-filled mission to find his killer, while also being pursued by the police as the crime’s prime suspect.

Dashcam is an interesting film. I’m not sure if it uses the Screenlife technology or not, but much of the film plays out like Screenlife films. This is a concept that I’ve fallen in love […]