Fun. That’s probably the word that best describes The War with Grandpa. It’s a fun, family movie filled with a lot of laughs. Sure, the film is a little juvenile, but it’s a family-friendly movie with a lot of heart. I would say that this is a must-watch for everyone, especially during COVID when we’re all looking for a cute laugh.

In the film, sixth grader, Peter (Oakes Fegley) is angry when he learns that his grandfather, Ed (Robert De Niro), is moving in with them and taking his room. To make matters worse, Peter has to relocate to the unfinished, dimly lit attic. After listening to his friends, Peter declares war on Grandpa Ed and, after the terms are decided, the war officially begins.

The remainder of the film is a series of ever escalating pranks that go from expected to ridiculous, culminating in an extreme prank. From there, everything goes down hill and we get a heartfelt conclusion to the film. While the story is cute, I feel like the primary purpose of the film is to share the ridiculous pranks and to give us Robert De Niro, Christopher Walken, Jane Seymour, and Cheech Marin bouncing on a trampoline.

My favourite moment wasn’t even the film, but a comment made by my wife. She commented that Peter’s mom “looked like a younger version of the actress from Kill Bill.” Yes, she was talking about Uma Thurman who played The Bride and also plays Peter’s mom. Also, The War with Grandpa was filmed 15 years after Kill Bill. So, I suppose credit to Uma Thurman, since she’s aging in reverse… a real life Benjamin Button I guess. Note: According to my wife, she thought the actress looked like Uma Thurman but didn’t think it was Thurman because she thought Thurman would look older. I misunderstood, but it was still hilarious at the time.

This is the type of film where you just have to expect that you’re going to laugh and laugh, but never get drawn into any serious plot or character development. You have basic characters with limited depth and a very simplistic plot, but it is so much fun that none of that matters, it’s a film that is made for the sheer sake of enjoyment.

The one spot where the film could have used a bit of polish was a scene involving Christopher Walken and a one wheeled skateboard. Clearly a stunt double was used for the scene and that makes perfect sense, but I don’t feel like they tried very hard to get someone who could double for Walken, there’s a very obvious, a very, painfully obvious, difference between the double and Walken that completely pulled me out of the moment.

Honestly thought, that’s probably my only complaint and if I can’t find anything else to complain about, then it must be a good film.

The War with Grandpa is available on VOD wherever films are rented.

The War with Grandpa 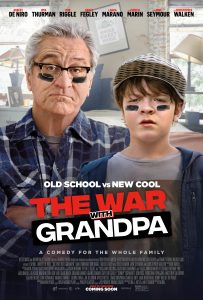 Movie title: The War with Grandpa

Movie description: Sixth-grader Peter (Oakes Fegley) is pretty much your average kid—he likes gaming, hanging with his friends and his beloved pair of Air Jordans. But when his recently widowed grandfather Ed (Robert De Niro) moves in with Peter’s family, the boy is forced to give up his most prized possession of all, his bedroom. Unwilling to let such an injustice stand, Peter devises a series of increasingly elaborate pranks to drive out the interloper, but Grandpa Ed won’t go without a fight. Soon, the friendly combatants are engaged in an all-out war with side-splitting consequences.

I knew that I had to watch Satanic Panic as soon as I saw the cast list. Jerry O’Connell has been a favourite of mine ever since I saw him in Stand be Me and […]