Pumpkin Pie Wars aired in Canada after the Love in Design premiere. I had not seen it and, given my love of romcoms and the fact that it was also directed by Steven Monroe, I decided to check it out. Just as Hallmark Channel movies always do, it evoked plenty of emotions. The movie is a few years old but looks like, given the pumpkin theme, it would get plenty of replay value this time of year. The lead actors were charming, looking them both up afterwards, I was pleasantly surprised to learn that Julie Gonzalo was a Veronica Mars alum (and disappointed that I didn’t recognize her). I was also disappointed to discover that Eric Aragon has a very limited resume, as I’d like to see him in more movies.

The movie starts 10 years in the past as long time friends Faye McArthy ( Michele Scarabelli) and Lydia Harper (Jennifer Juniper Angeli) have a falling out over the opening of a bakery. As we fast forward, we learn that Faye’s business is in trouble but she can’t compete in the annual pumpkin pie competition due to an injury. Her daughter Casey (Julie Gonzalo) is set to replace her and, upon learning this, Lydia decides that her son Sam, the chef, will compete in her place in order to drum up publicity. At one point, their rivalry is compared to that of the Hatfields and McCoys (which clearly inspired the family names in the movie) but the movie has very strong Romeo and Juliet undertones.

The movie ultimately concludes with Sam and Casey getting exactly what they want and everyone living happily ever after, but, along the way, the movie brings both smile and tears. They are, in this case, happy tears and not significant enough to require a tissue – just a warming of the heart that causes a little dust to get in your eyes. One of the more touching scenes is the discovery that Faye and Lydia’s husbands have continued to remain friends, against their wives’ wishes, with a regular golf game.

In the end, the movie gives us what Hallmark Channel movies are best at… a good looking cast paired with a classic storyline in a modern setting. Sprinkle with cheese, emotions, and cliches and serve with just the right music to set the mood. On that note, I want to call attention to the sound track for this movie. The selections were excellent. Often music fades into the background and, unless it’s a song you’re familiar with, it goes unnoticed. In this movie, I felt like the music really emphasized key scenes in a way typically only scene in big budget products. It wasn’t the musical extravaganza of Baby Driver, but the music definitely made the movie better.

While you may have already seen this movie, it is worth checking out while we’re still in pumpkin season. It seemed like a fitting film to watch during the Canadian Thanksgiving weekend and one that I really enjoyed. 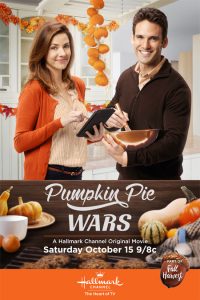 Movie description: Ten years ago, Faye and Lydia each opened their own bakeries in Emeryville, Ohio, after a personal and professional fall-out during a local Pumpkin Pie contest. Now their children, and co-workers, Casey and Sam, are set to carry on the rivalry as they go head-to head in the same contest. There's only problem for these two people who are supposed to hate each other, they start to fall in love.