Truffle hunters will camp out on their porches at night, shotgun in hand, to fend off competing hunters trying to steal their valuable pigs and dogs. What? That was one of those facts that felt otherworldly yet immediately relatable to me, and that’s where PIG started. It got me imagining what sort of person would be so attached to their truffle pig that this would be a quest worth following. Then came the image of this tattered old man, alone in the woods with only his pig. Where did he come from? Then his world and history started to unfold around him, and PIG began to take shape.

I thought that it would be useful to start this review with that quote from writer/director Michael Sarnoski’s director’s notes. When I read the description for this film, I was in disbelief. A film about a truffle hunter whose pig has been stolen? Only Nic Cage could star in that film. In fact, I would have called this a 3-star film, but Cage bumped it up to 3.5-stars. So, what are we dealing with here? It turns out we’re dealing with an interesting movie that definitely holds your attention.

The film feels like it has to be based in Portland. Knowing what I know about Portland (which isn’t much), everything that seems over the top seems less over the top. I could see truffle pigs being prized possessions. I could see ridiculous foods served in restaurants. I could see bareknuckle boxing among kitchen staff. I could even see the city divided up into truffle dealing turf akin to how gangs divide up territory for dealing drugs.

After Cage’s truffle pig is stolen, he calls his buyer to help him seek out his pig. This takes them into the seedy underbelly of the Portland restaurant scene. The result is actually fun to watch and more than a little messed up. Everything I mentioned above actually happens in the film. Cage spends much of the film bloodied and, for some unknown reason, never cleans the blood away. I found the fun of the film was the revelations about Cage’s character… who he was and how he became who he is. It’s an interesting and not unbelievable story.

My biggest problem with the movie was the running time. The film comes in at a respectable 92 minutes. It has always seemed to me that 90 minutes was the average runtime for a film in the 90s, but that they tend to skew closer to 120 minutes these days. That lead me to a Google search that brought up this article from 2018 by Przemysław Jarząbek that proved me wrong. The average runtime when broken down by decade has stayed relatively consistent. Not sure most readers will care about this, but I thought it was very interesting. Back to my complaint. The film doesn’t have the level of depth and character development that I want. I feel like there are times where I want to know more, but it doesn’t provide enough data. I think that adding an extra 15-20 minutes to the runtime to flesh out the characters and better setup some of the scenes would have made this a 4-star film.

At the end of the day, it is Nic Cage and a pignapping – that alone should make you want to watch the film.

Pig will be released in theatres on July 16. 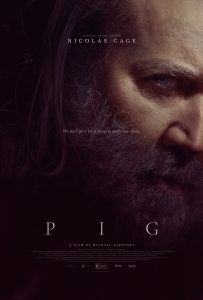 Movie description: A truffle hunter who lives alone in the Oregonian wilderness must return to his past in Portland in search of his beloved foraging pig after she is kidnapped.