FINALLY! I finally saw Captain Marvel, a movie I’ve been waiting to see since it premiered in theatres. I had tickets for opening night, but a bug kept me from seeing it. A few days later, we had tickets once again, but I had passed the bug on to my wife. At that point, we had spent $100 trying to see the film and I decided it was time to simply wait for the home release. Between work, NBA Finals, and Stanley Cup Playoffs, today was the first chance I had to watch the film. My initial impression is the same as my reaction was to Brie Larson being cast as Captain Marvel… AWESOME! If you’re one of the trolls that tried to sabotage this film, I doubt we’ll ever see eye to eye because you clearly can’t understand good film. My wife summed it up in a way I couldn’t when the movie ended and she said, “Finally, we get a good female superhero lead.” We had to give up on the Supergirl series and, while Wonder Woman was an okay movie, it wasn’t something we loved. This, on the other hand, I think we both agreed, was amazing.

I know that at this point, if you wanted to see Captain Marvel, you probably already have, so I won’t dig too deep here, but I will touch on the basics. The movie is the origin story of Captain Marvel and we get a glimpse into the war between the Kree and the Skrull. Within this plot, we get a hero finding herself and an amazing story of humanity. We see the best of people and the worst of civilizations We also get to see Brie Larson kick ass and take names and, seeing her as Captain Marvel, I don’t think anyone else could have played the part. We also get our comic relief from Samuel L. Jackson’s Nick Fury in his interactions with Goose the “cat” (actually a Flerken). These scenes were awesome, particularly the footage of the “cat” pressed against the crates in the Quadjet.

One of the things I really liked about this film was the interaction. Marvel films are great at action and some of the more recent films have had a good deal of comedic interaction, but this one felt like we got more of a personal story, something that I think fit well and was desperately needed within the MCU. I’m hoping that we see more of this going forward. Another really appealing aspect of the film was the soundtrack, especially when paired with some of the 90s background references – Blockbuster Video, Radio Shack, Bush, Smashing Pumpkins, and 311 posters, Gameboy, and payphones. Speaking of which, the payphone turned into an intergalactic communicator was rather amusing. The fight scene of Captain Marvel kicking everyone’s ass to No Doubt’s Just a Girl was absolutely perfect.

The Stan Lee tribute was beautiful and his cameo was about as perfect as any cameo could be – bringing together two of my favourite worlds. I don’t want to spoil it, it was spoiled for me, but I still found it amazing. If you haven’t had it spoiled, this will be a standout scene in the film. 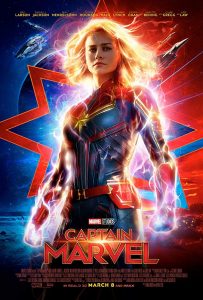 Movie description: Set in the 1990s, Marvel Studios’ “Captain Marvel” is an all-new adventure from a previously unseen period in the history of the Marvel Cinematic Universe that follows the journey of Carol Danvers as she becomes one of the universe’s most powerful heroes. While a galactic war between two alien races reaches Earth, Danvers finds herself and a small cadre of allies at the center of the maelstrom.