Redemption Day was so much more than I expected it to be. I was drawn to the film because it starred Serinda Swan who I adored in both Breakout Kings and Graceland. I was surprised, however, to also encounter Gary Dourdan (CSI: Crime Scene Investigation) and Ernie Hudson (Ghostbusters). I don’t think that I’ve seen Dourdan since his time on CSI, so it was nice to see him on screen again.

The film is a classic action movie plot. In the vaguest of terms, an individuals loved one is taken by villains and the individual just happens to have military training that allows them to recover their loved one. It’s not a bad plot, it’s actually the basis of my favourite action movies, so I enjoyed watching the story play out. If we talk about this film specifically, Brad Paxton is a Marine whose archeologist wife, Kate (Serinda Swan), is taken by terrorists while on an excavation in Morocco. The movie had more of a lull between the kidnapping and the recovery than most films do, but that wasn’t a bad thing… it allowed the story to progress quite nicely.

My favourite moment, where I actually laughed out loud, was a scene with Moroccan rapper Don Bigg, who plays an analysts credited as Officer Issam, who, when asked what he is called, replies, “Neo. Like the brother from the Matrix. I’m the XL version.” I actually enjoyed all the scenes that featured Bigg… he did not have a large role or a lot of lines, but he had a presence in the scenes that I could appreciate. I also appreciated the director’s cameo. I think that Hicham Hajji did a great job writing and directing this film and the cameo he has was added in such a way that he stood out on screen without being a star of the film.

That said, I did have a few issues with the film. The first was the child actor that played Swan and Dourdan’s daughter. I know that a lot of smaller budget films struggle with finding a standout cast, but this film had an amazing cast with that one exception. I couldn’t find evidence of this anywhere, but given the last name of the child actor, I’m assuming it was the director’s daughter. She actively brought down every scene she was in. It was as if she didn’t even want to be there. The other problem was the surprise addition of Robert Knepper in the final scenes of the movie. Typically, I like to avoid spoilers… but I don’t feel like this was part of the film. It was the type of scene that you’d find after the credits of a major blockbuster indicating an upcoming sequel, but I just don’t see how a sequel to this film is even possible. It just didn’t add anything to the movie that I had just watched and, in fact, detracted from the final scenes of the actual film. Unless there’s a sequel in the works, I would have cut the scene and if there is a sequel in the works, I would have put the scene after the credits.

If you’re looking for a good mindless action film, then I’d recommend checking this one out. I wouldn’t venture out to a theatre or even pay pre-release rental prices for it, but it’s a good Sunday night zone out action flick… maybe even a good Friday night flick if you’re a big fan of action movies or any of the stars of this film.

Saban Films will release Redemption Day In Theaters January 8, 2020 and On Digital and On Demand January 12, 2020. 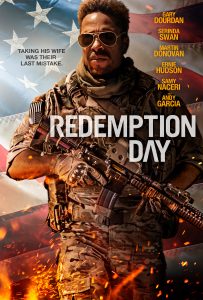 Movie description: Having just returned home, decorated U.S. Marine Captain Brad Paxton's (Gary Dourdan) wife, Kate, is kidnapped by a terrorist group while working in Morocco. He is forced back into action for a daring and deadly operation to save the woman he loves.