Lately, I’ve had the opportunity to watch some interesting movies and the latest film I viewed, Phil, is no exception. Starring Greg Kinnear and Emily Mortimer, the film, which is also Kinnear’s directorial debut, tells the story of a lonely dentist going through a divorce who happens to meet a man so happy it seems hard to believe. The film is a dark comedy that revolves around a suicide, but it still finds a way to stay relatively light and quite funny. I found myself laughing out loud at several of the scenes. Kinnear and Mortimer are supported by Jay Duplass, Taylor Schilling, Kurt Fuller, Luke Wilson, and Bradly Whitford, a cast that I would consider to be top notch, but not quite A-List. I always find casts like this amusing because they are well known and established actors with a number of credits, but they are the type of actors where I’ll have to pause the film to explain to my wife other movies and TV shows that she’s seen them in. In this case, while Luke Wilson and Taylor Schilling were instantly recognizable, I had to point out that she had previously seen Emily Mortimer in The Newsroom and Bradley Whitford in Trophy Wife.

Kinnear plays our lead character, Phil, who meets Michael Fisk (Whitford) after he comes in for a check-up at Phil’s dental practice. Phil clearly has some issues – divorce, difficulty connecting with his daughter, and depression to name a few – and he’s instantly fascinated with Fisk and his incredibly upbeat attitude. When Fisk goes out to dinner with his wife (Mortimer) and his daughter (Sarah Dugdale), Phil spots them and begins to follow Michael around. While stalking Michael, Phil inadvertently stumbles across Fisk’s dead body following a suicide. This causes Phil to spiral, culminating in Fisk’s wife, Alicia, finding a drunken Phil sleeping on her husbands grave. Phil pretends to be Michael’s old friend from Greece and inserts himself into Alicia’s life. This is where the comedy kicks in, watching as Phil buries himself in lies and struggles to stay on top of them.

A lot of the humour, at least initially, comes in the way of slapstick, as Phil finds himself working on a bathroom remodel for Alicia, a job he clearly is not able to handle. Phil continues to be a constant source of humour for the remainder of the film. At the same time, however, you find yourself wondering why he’s doing this and what he hopes to accomplish. The entire film is a journey to answer the question, “Why did a happy man kill himself?” There appears to be no suicide note, no reason whatsoever, but Phil continues to attempt to figure it out, spending more time with Michael’s family and digging deeper and deeper into the man that Michael was. You will find yourself guessing along with Phil, wondering if Phil has the answer or if you know better than him. There are a number of interesting tidbits of information that are discovered, but the question ends up being whether or not any of them will lead to an answer.

I won’t spoil if we find out why Michael killed himself, but I will say that the entire second act of the movie reminds me of those Facebook memes that seem to be gaining in popularity (or at least circulation). You see a number of smiling, dead celebrities with the message, “This is the face of depression.” During Phil’s search for the answer to “Why?”, I found myself thinking about those memes. Maybe this is too philosophical for a movie review, but, in society, we tend to associate being sad and looking unhappy with depression, while many tend to believe that a smiling, happy person can’t be depressed. I feel like this movie was trying to kick over that stereotype and it may have succeeded, at least a little. Your take away might be completely different from mine, but that was how I read into it.

At the end of the day, I thought this was a really well done film and evidence that Greg Kinnear is just as effective behind the camera as he is in front of it. Check the film out on July 5, when it appears in theatres and on demand and digital. 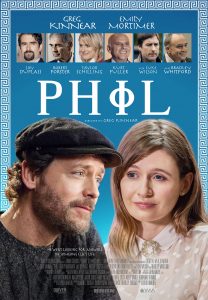 Movie description: Phil, a depressed dentist whose life is falling apart, is shocked when one of his patients, a man who seemed to have the perfect life, kills himself. Determined to find out what would drive a man who had everything to end his life, Phil pretends to be a handyman and integrates himself in to the dead man's life, befriending his wife and daughter. How long can Phil keep up this double life when he is already ready to end his normal one?

Sweetie, You Won’t Believe It

For years, I have tried to attend the Toronto After Dark Film Festival. I’ve had tickets to numerous movies, but scheduling has always gotten in the way. This year, however, with the festival online, I’m […]