This film feels very timely. We’re hearing stories about increases in opioid related deaths. We’re struggling to find human contact. Some people are wondering if we’re stuck inside a simulation. Then along comes Bliss and all I can say is that Mike Cahill is a genius. Mike, if you ever read this and are open to discussing the film, I’d love to talk! Cahill gives us a story that keeps you on the edge of the seat and gives you a view into so many things. How quickly life can slip away, how reality blurs from person to person, how powerful certain bonds can be, and how looking for something better might skew what is right in front of you. I’m not even sure if that’s what Cahill intended to discuss, I feel like this movie could go in a hundred directions and the open-ended nature of the film gives us so many possibilities. Let me be very clear, I normally hate open-ended films, but, in this case, I feel like it was perfectly executed. Cahill isn’t afraid to give us an ending, he’s just giving us enough room to open the door and have conversations. Just as Last Call opened the door for discussions around suicide and depression, this film opens the door for discussions around class stratification, drug abuse, reality, and so much more. My wife, who edits these reviews, and I discussed the film for nearly an hour after we finished it. I’m still not sure we have an answer and I don’t want to share my opinion for fear that it would influence your viewing, but I will tell you a little about the story.

There’s a lot in Bliss, I could talk hours about the layers of meanings we tried to construct. Hopefully those layers of meaning will be found and even supplied by the viewers who project their own lives into the work. That is one of the great pleasures of doing this work, the meanings and readings of the film continue to live long after the credits roll.

In Bliss, Greg Wittle (Own Wilson) is watching as his world crumbles around him. In the first few minutes of the film, we learn that he is recently divorced and we watch him get fired. It also appears that he has a prescription pill problem. As his problems are piling on, he meets Isabel Clemens (Salma Hayek) and she claims that she can make all his problems go away. After that the 103 minute film takes you on a wild ride that leaves you questioning everything you see and everything that is said. Isabel is convinced they are in a computer simulation and, after a couple of demonstrations, Greg starts to believe her. This is where I think the film is really interesting. What is real and what isn’t? Is it simulation or imagination? Are we watching a drug-induced fantasy or are we experiencing the real world? These are questions that you will ask as you watch the film.

In addition to the (seemingly) drug fueled romance between Greg and Isabel, you also get a family drama with Greg’s daughter, Emily (Nesta Cooper), searching for him. This is what makes the film so impressive, it is layer upon layer. Greg’s apparent mental break. Isabel’s belief that they are in a simulation. Emily’s search for her father. They all have interactions with others that just provide more evidence and more questions. I’m not sure we’ll ever know what was real and what wasn’t real, but I think that the message was pretty clear. The film shows us bliss; it shows us how it can appear that ignorance is bliss, but it also shows us how “ignorance is bliss” is in the eyes of the beholder and that bliss might be enjoyed to the detriment of everyone around you. It shows us the class divide and the way that society looks at people that are out of control or who have lost their way. In some ways, when watching some of the scenes, it feels like Cahill is holding a mirror up to us, that we’re seeing ourselves reflected back in moments of the film.

This is far more philosophical than I like to get in my reviews, but I think this movie deserves it. At a time when virtual watch parties are helping people cope, I think that Prime Video is launching the perfect movie for a watch party. I believe that viewers of this movie will either love it or hate it. Those that love it will want to discuss it, revisit it, and explore it. While a lot of interesting background items stood out while watching the film, I’m not sure that I caught all of them. I’m eagerly awaiting the film’s release, so that I can watch it again.

Bliss will launch worldwide on Prime Video on February 5. 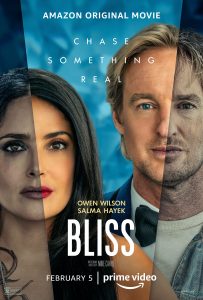 Movie description: Bliss is a mind-bending love story following Greg (Owen Wilson) who, after recently being divorced and then fired, meets the mysterious Isabel (Salma Hayek), a woman living on the streets and convinced that the polluted, broken world around them is just a computer simulation. Doubtful at first, Greg eventually discovers there may be some truth to Isabel’s wild conspiracy

Tonight being Halloween, a horror movie was in order. I sent my wife out of the room, turned off the lights, and turned on The Howling – Joe Dante’s 1981 classic. My wife had actually […]