The past couple of years, I’ve been wondering if Hallmark will lose their crown as the King of Christmas films. The streaming services have been killing it with great films and they make it much easier for media to get their hands on digital stills and one sheets (poster art). I’m actually on year two of my Hallmark boycott that started when they told me I couldn’t get photos and one sheets until I had 40,000 followers on both Instagram and Twitter. The streaming services, on the other hand, make this data readily available, which makes it easier for smaller publications like this one to write reviews and include basic things like a photo and the poster. This, of course, won’t be the death of them, but the superior movies from streaming services may be.

That includes films like Operation Christmas Drop, which is based on a real tradition. This was the part that surprised me… I had never heard of the actual operation. The tradition, started in 1952, serves as a training mission for the US Air Force and is the longest-running humanitarian airlift in the world. It is launched from Guam and targets the islands of Micronesia. Unlike the film, the operation is not actually at risk of cancellation.

Which brings us to the film, a romantic comedy from Netflix, featuring Kat Graham (Erica) and Alexander Ludwig (Andrew). In the film, a congresswoman (Virginia Madsen) sends one of her aides (Graham) to Andersen Air Force Base in Guam to investigate military spending on Operation Christmas Drop and identify reasons to close the operation and base. Captain Jantz (Ludwig) is assigned to be Erica’s liaison on the base, he also happens to be the individual in charge of Operation Christmas Drop. The film takes a real life story and almost gives it a bit of a Grinch or Christmas Carol-esque vibe. While the film is filled with all the typical romcom elements and expected cheese, it provides a bit of fictionalized insight into the importance of this tradition on the lives of those on the islands of Micronesia.

There are a couple of things that I want to point out and at the top of that is list is Bethany Brown, who plays Sunshine who plays an airwoman on the base. She sings a couple of times in the film and her voice is spectacular. While she seems to lend her vocals to a couple of tracks, she doesn’t appear to have an album out, but I think she definitely should. The other is Bruce Best (Brother Bruce) who plays himself in the film. He has, for more than 35 years, provided communication and coordination between the islands and the aircrews during Operation Christmas Drop. While he is a minor background character in the film, I found him fascinating as a person and would love to see a documentary on him.

At the end of the day, you know what you’re getting into with a film like this. You get a light story with a lot of heart, something that is fun and feel good. In this case, the cause of the feel good is real and that makes it even more special in my eyes. If you missed watching Operation Christmas Drop before the holidays, you should definitely check it out now. It was a fantastic film that will warm you on a cold winter’s night. 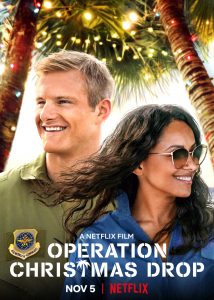 Movie description: While gathering evidence to support closing a tropical U.S. Air Force base, a congressional aide warms to its generous captain.

I loved the first part of this documentary trilogy. I wasn’t as impressed with the second part. It is still quite interesting and I learned about movies I hadn’t seen (and now want to see). […]