To say that I love cheesy horror, thriller, slasher type movies would be an understatement… it’s currently one of my favourite genres. So, when We Summon the Darkness first came to my attention, I knew that I had to see it. As an added bonus it featured Alexandra Daddario (star of films like Baywatch, San Andreas, and The Layover) and Johnny Knoxville (who is a much better actor that I would have thought when I first saw Jackass, I’ve loved him in movies like Action Point and Skiptrace). The film lived up to my expectations, other than one negative that I’ll get to later on. It was a lot of fun and kept my attention quite well. It is a great distraction in these quarantine times.

What did I love about the film? Pretty much everything. Three girls are out to see a metal show and, during their travel to the venue, we here repeated mention of gruesome murders taking place across the country. Daddario plays the leader of the group, Alexis, joined by two friends Val (Maddie Hasson) and Bev (Amy Forsyth). At the show, they meet three guys – Mark (Keean Johnson), Kovacs (Logan Miller), and Ivan (Austin Swift) – who they invite back to Alexis’s dad’s house for an after show party. At this point, there’s some fun banter and conversation and the movie is setup pretty well. Unfortunately, this is also where my one dislike for the film comes into play. The big “twist” in the film is that the gruesome murders we here about are committed by other members of Alexis’s congregation. Surprise! This metal-head that lacks knowledge of metal is actually a hardcore Christian looking to kill people. Normally, I avoid spoiling twists, but this one is telegraphed for the entire first act of the film. In trying to keep the twist hidden, writer Alan Trezza and director Marc Meyers repeatedly hammered the notion of the it into the viewer’s head. Even with the failed twist, the movie is highly entertaining.

I think the main reason that the movie worked so well is the acting of Amy Forsyth. Her character, Bev, has the most interesting character arc and some of the most interesting scenes. She also experiences a couple of transformations throughout the movie that make her more interesting as the movie develops. While much of the acting felt like acting, Amy was her character. Every scene she was in, every look she had, every word she said came across as honest and real. I was impressed beyond belief at how well this character was portrayed and how incredible the acting was. No one was bad, Forsyth was just better than everyone else… the movie is worth watching just for her performance. Given how important her character was, I was surprised to see a relatively unknown actor cast in the role. I hope everyone in Hollywood looking for an amazing young lead is looking her way because I’d love to see her in future movies.

The movie has blood, gore, heavy metal, and a few laughs. It really has everything you need to be distracted right now. The film drops on Friday and I think it is the perfect movie to round up those you are quarantined with, make a bowl of popcorn, and have a few drinks. Check it out on demand and digital on April 10.

We Summon the Darkness 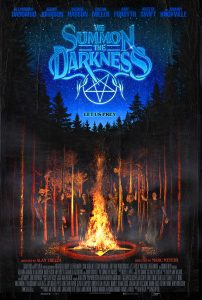 Movie title: We Summon the Darkness

Movie description: On the way to a heavy metal concert, Alexis (Alexandra Daddario) and two girlfriends hear a news report of a local murder believed to be tied to a series of satanic killings. After the show, the girls invite three guys to join them at the estate owned by Alexis’s father, a fire-and-brimstone preacher (Johnny Knoxville). What starts as a party suddenly turns dark and deadly in this devilishly entertaining thriller.

Growing up in Canada, and specifically Northern Ontario, hockey is a way of life. My bookshelf was filled with hockey stats books, my closet was full of hockey cards, and my parents froze in empty […]