Nitram covers the events leading up to the Port Arthur mass shooting in 1996 without actually depicting the event itself. While the synoposis of the film talks about it being the mid-90s and the film appears to take place over a relatively short period of time, the reality is that the events portrayed cover nearly a decade. I think that is an important fact to be aware of going into the film, as it completely changes the perspective in my eyes. The film gives us insight into the perpetrator of the mass shooting and, in my opinion, gives us a first hand look at how things derail when the mental health system fails to properly treat clearly troubled individuals.

Whenever such a heinous act occurs the perpetrators are quickly labelled evil and crazy, for this makes the news easier to digest. But I believe this to be dangerous, as we as a society stand to never learn anything from the tragedy. Instead, I choose to look closer. Not in any attempt to sympathise with the killer but rather to try and better understand what leads an individual to carry out such a crime. I understand a community’s wish to forget the man’s name, but to forget the event risks it repeating itself and I would much prefer our reminder to be a scripted narrative film than another news report.

With the story itself, there’s really not a lot to talk about, everyone either knows the story or can read about it online, so I’m not going to dig into too much there. I will say that to fit the brevity of the film, it is not a 100% factually accurate retelling, then again it also isn’t a documentary, so I wouldn’t expect it to be. What I will say is that the film was really well put together. The cast was phenomenal and the story progression was very well done.

Speaking of the cast, that’s what I really want to talk about. Caleb Landry Jones, who played Nitram, was absolutely amazing. He came across and truly unhinged and completely believable. I knew I was watching a film but I was still terrified of the man that I saw on the screen. As I watched, I wondered if institutionalization shouldn’t perhaps exist for certain individuals. You have someone with clear mental health issues making life a living hell for everyone around them and the outcome was absolutely devastating. His parents tried, but Nitram clearly needed a group home or in-patient treatment for the multiple issues he had. Jones makes it easy to see how the system has failed Nitram time and time again.

Jones, however, is not the only superb actor in the film. Nitram’s parents are portrayed by Judy Davis and Anthony Lapaglia, both of whom are fantastic in their roles. Davis is clearly at her wits end, struggling to care for her son with little support from her husband who, at first, appears to be more interested in keeping Nitram happy than dealing with his very troubled nature. This results in Davis coming across as a harpy, for lack of a better term. Instead, she is clearly on the edge and unsure of how to best help her son. Lapaglia, whose character develops a little more slowly, is clearly dealing with his own demons and ultimately portrays a damaged and broken man who can’t save anyone else because he needs to be saved himself. I was shocked when I saw Lapaglia’s name as I considered him to be unrecognizable from when he played Joe Reaves in Empire Records, one of my favourite films of all time.

Finally, we have Essie Davis as Helen, Nitram’s friend? I put a question mark there because it is a relationship that I do not understand and I’m not sure the film did either. Helen is very wealthy but seems to be reclusive and shy in the film, forming a bond with Nitram that prompts his own mother to ask if it is the relationship of a mother and a son or a husband and a wife. Maybe we can’t put a label on the relationship, but whatever it was it was creepy and weird and Essie Davis played the role quite well.

At the end of the day, when you’re telling a story like this, there’s only so much that can be done if you are attempting to stay true to history, so the performances and the flow of the film are the most important aspects. Every performance was incredible and the film flowed relatively well. There were a few times when I wanted more detail, a better transition, or better pacing, which is the only reason the film didn’t garner a 5-star review, but at the end of the day, I highly recommend checking it out.

Nitram will be released in theaters, on digital rental and AMC+ on March 30. 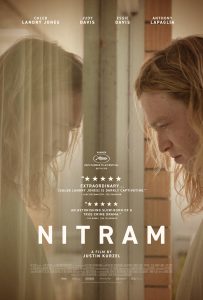 Movie description: Nitram (Caleb Landry Jones) lives with his mother (Judy Davis) and father (Anthony LaPaglia) in suburban Australia in the Mid 1990s. He lives a life of isolation and frustration at never being able to fit in. That is until he unexpectedly finds a close friend in a reclusive heiress, Helen (Essie Davis). However, when that relationship meets a tragic end, and Nitram’s loneliness and anger grow, he begins a slow descent that leads to disaster.