I love a good western. It’s just a classic genre of film that makes me think of my dad. If not for him, I probably never would have seen a western and I likely wouldn’t enjoy watching them. When I was younger I loved watching westerns and those classic 80s action flicks with him. To this day, when I go home to visit, it usually involves watching movies, often from the western or action genres. So, when Murder at Yellowstone City was brought to my attention, I wanted to check it out.

I was first drawn to the film by the cast list. While none of the names are huge, they are all highly recognizable and I was excited to see what they would do on screen together. The film creates an entire town and gives it character and personality. We get a ridiculous over the top sheriff,  a combination saloon/brothel, and a quirky, diverse ensemble that brings the film to life. We also get an interesting setup and a fantastic conclusion. So why, you might ask, did the film only garner 3-stars? The middle of the film fell apart. I felt like it was dragging and I lost interest. I don’t know if it was too busy or too slow because, at times, it felt like both were true. We can sum this up to something that I find plagues many films – a pacing issue.

The film centres around a town, Yellowstone City, in the year 1881. Once prosperous, most people have stopped looking for gold and the town is dying. Those that remain are people who seem to be looking to escape society. Suddenly, one of the townsfolk finds gold and things are looking up – everyone in town will prosper from this find. Unfortunately, before the lucky prospector can realize his good fortune, he is murdered and the town goes on the hunt for the killer. In expected fashion, the blame is placed on a former slave who has wandered into town, Cicero (Isaiah Mustafa). As the bodies pile up, Cicero finds allies who question if the sheriff has the right man, but justice is less important than it should be in this small frontier town.

The film gives us a murder mystery that is solved much too quickly. It immediately becomes clear that something is up and the pieces fall in place without much effort. It is during this part of the film that the pacing is off and the viewer struggles to remain interested. The film’s saving grace at this point is the town’s minister Thaddeus Murphy (Thomas Jane) and his wife, Alice (Anna Camp), who keep the film interesting enough to continue watching. If you can suffer through the pacing issues, you get what you wait for with every western – the shootout. It was good, it was really good. I found myself on the edge of my seat and I was completely reinvested. If the same care had gone into the middle of the film as had gone into establishing the town in the opening and wrapping up the shootout at the end, this would have been a fantastic film. It is, however, still worth watching if you are a fan of westerns.

I want to take a moment to talk a bit more about Jane and Camp. Thomas Jane is a very hit or miss actor for me. I thought he was the worst part of The Expanse and I actually stopped watching first season due to his performance. I, ultimately, returned to the show and loved it, but it was in spite of Jane, not because of him. In film, however, I typically love his performance and look forward to seeing him on the screen. With Camp, I love everything she is in and, lately, that is a lot of things. My wife was passing through the room as Camp appeared on screen and my wife said, “Wow…she’s in everything lately.” I think it is because Anna Camp is believable regardless of her role. She isn’t typecast and has a lot of range. Seeing both Camp and Jane in the cast list was definitely a big part of why I wanted to check out this film.

If you’re looking for a decent western and won’t get bored with wonky pacing, you should check out Murder at Yellowstone City.

Murder at Yellowstone City was released in Theatres, on Digital and On Demand on June 24. 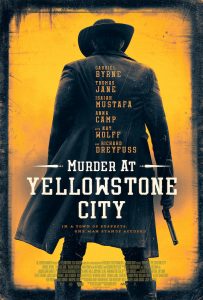 Movie description: The once peaceful and booming Yellowstone City has fallen on hard times, but when a local prospector strikes gold, things seem to be turning around. Any hope is soon shattered when the prospector is found dead and the Sheriff quickly arrests a mysterious newcomer. But nothing is so simple in this sleepy western town, and more than a few of the locals have secrets to keep and reasons to kill. As the brutal murders continue, pitting neighbor against neighbor, Yellowstone City goes down a bloody path to a final showdown that not all will survive.