I’ve sat on this review for over a week, I very rarely go more than 24 hours before I write my reviews, but I felt like rushing this would have been a disservice to the film. I needed to really think about it because of the subject matter. The Glorias focuses on the life of Gloria Steinem – journalist, fighter, and feminist. Gloria is portrayed by 5 different women over the course of the film – Ryan Keira Armstrong as a child, Lulu Wilson as a teen, Alicia Vikander as a young woman, Julianne Moore as a middle-aged woman, and finally Gloria Steinem herself in the most recent scenes. The film tells her story in a unique and interesting way, but it’s important to keep in mind that this biopic only focuses on one aspect of Steinem’s life – her involvement in the women’s rights movement and the path that brought her there. There are many aspects of her life, including her ties to the CIA that are completely overlooked in this film.

Gloria had written a road book, a series of seemingly disconnected moments and events, both political and private, that once reinterpreted into film could connect to make what is even more rare in cinema, a Female Road Picture; one in which the female leads do not die in the end, and where the “narrative” is not driven by romance or a bad marriage, or unrequited love or, for that matter, men. Gloria’s road story is more of a “Meetings With Remarkable Women”. And that is a love story in itself.

When it comes to looking at the delivery of a story, I think that it’s important to talk about the good, the bad, and the ugly, so let’s do that.

We’ll start with the good because honestly there’s more of that to discuss than anything else. My favourite aspect of this film, beyond the fact that it is brimming with historical content, is the use of archival footage. So much of Gloria’s life has been captured on camera and it was interwoven the film to create a wonderful storytelling approach. Seeing actual footage speaks to the honesty of so many of the film’s scenes. Another amazing element of the film was director Julie Taymor’s creation of the bus out of time. Throughout the movie, there’s ongoing narration involving all of the Glorias told from a Greyhound bus traveling across the country. In these black and white scenes, the Glorias interact, asking questions of each other and offering advice. It provides a really unique method of communication that lets the audience feel like they are inside Gloria’s head.

When it comes to the bad, it is a few moments that don’t seem to line up with history. Certain portions of her history like romantic relationships and her ties to the CIA are left out in order to allow the film to focus on a singular topic. It works well, but I would like to see a more complete picture of her life at some point. Whenever I see a biopic, I find myself researching the timeline, reading the person’s bio, and digging in as much as I can. One thing I noticed is that the founding of Ms. Magazine, which appears as very grassroots and independent in the film actually happened due to the help of New York magazine and its editor. That isn’t really captured and it feels dishonest… but it is one small section of a much larger movie… which is why it is the bad and not the ugly.

The ugly is definitely the times in the film, particularly the first time it happened, where the director made me think that someone had slipped me acid. In a completely normal, time hopping film tied together with an awesome narration technique, you suddenly find yourself tripping out as a Wizard of Oz tornado sequence appears on the screen. This came out of nowhere and really disrupted the film for me. My wife and I turned to each other with puzzled looks on our faces and started to check for a gas leak before remembering that we live in an apartment without gas. These crazy scenes that simply don’t fit the rest of the film happen a few times. Another one features Gloria running on treadmills at various angles in various directions and it is, to put it bluntly, messed up. I definitely didn’t enjoy or appreciate these scenes and felt like they distracted from the story.

At the end of the day, the film is filled with a brilliant cast and tells the story of one aspect of the life of one of the 20th century’s most interesting people.

The Glorias is available on VOD and streaming free on Amazon Prime. 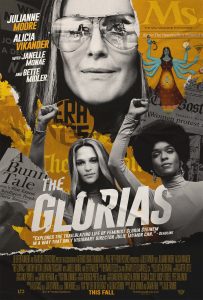 Movie description: Journalist, fighter, and feminist Gloria Steinem is an indelible icon known for her world-shaping activism, guidance of the revolutionary women’s movement, and writing that has impacted generations. In this nontraditional biopic, Julie Taymor crafts a complex tapestry of one of the most inspirational and legendary figures of modern history, based on Steinem’s own biographical book ‘My Life on the Road.’ THE GLORIAS (Julianne Moore, Alicia Vikander, Lulu Wilson, Ryan Keira Armstrong) traces Steinem’s influential journey to prominence—from her time in India as a young woman, to the founding of Ms. magazine in New York, to her role in the rise of the women’s rights movement in the 1960s, to the historic 1977 National Women’s Conference and beyond.