The other night, my wife wasn’t in the living room, which meant I could watch something from my Shudder watchlist. They have a couple of films I really want to watch in their Shudder Exclusives list, but I decided on Monster Party because it starred Robin Tunney (Empire Records, The Craft)and it was from RLJ Entertainment. To expand on that, when I started this site, it was a struggle to get studios to help out with press kits, with one studio (that produces warm and fuzzy made for TV movies) telling me that until I had 40,000 Instagram followers, we shouldn’t talk. RLJE, however, was amazing to me and I find that when I’m looking to watch a movie on a streaming service or rent a movie on iTunes, I tend to gravitate toward their films when one is in the running. I may not bring them thousands of new viewers, but I can repay their kindness by watching their films. It doesn’t hurt that their films tend to be great and this one was no exception.

Monster Party introduces you to a wealthy family that seems a little odd and an unrelated group of three teenagers that rob homes. I was rather impressed during their introduction at the approach these burglars took to avoiding detection. The three person team comprised of two guys and a girl worked quite smoothly with Virginia Gardner (of Runaways) playing Iris, standing at the curb in front of the home they were robbing, raising money for charity. I see this outcome all the time but never think about it, people tend to speed up to get away from you, meaning they spend less time looking at the house and the surroundings – eyes to the ground, walk fast, avoid interaction. It is the perfect way to keep someone from noticing the burglary. Her partners in crime were Casper (played by Sam Strike), whose father is a gambling addict, and Dodge (played by Brandon Michael Hall of God Friended Me) as the father of Iris’s unborn child.

The wealthy family is odd, for lack of a better term, and we learn that they are having a dinner party that Iris is scheduled to work at as a server. She is convinced by Casper and Dodge to rob the family and everything goes down from that point. Robin Tunney plays the family matriarch, Roxanne, and Julian McMahon (Runaways) plays her husband, Patrick.  The casting of two members of Runaways, one of my wife and I’s favourite TV shows, made for a disturbing scene. Now, the scene is not meant to be comfortable, but for fans of that show it will be double disturbing as Patrick eyes Iris up and down like a piece of meat. For those that are unaware, Julian McMahon plays Jonah on Runaways, the father of Virginia Gardner’s Karolina. The final cast member that stood out was Lance Reddick as Milo – while he is instantly recognizable from any number of TV series and films, for me he will always be Phillip Broyles of Fringe. Milo is an interesting character, that really needs to be seen to be understood.

So you’re thinking to yourself, this sounds more like a crime film or a thriller than a horror movie and, in many regards, it is more thriller than horror, but there are certain scenes that I think earn this film the horror classification. If this was simply a movie about robbing the home of a wealthy family, I doubt I would have found it on Shudder. Instead, this movie is about our group of enterprising criminals robbing a home belonging to reformed serial killers that are hosting a dinner party for other members of their serial killer support group, run by Milo. Once they become aware of the robbery, the movie becomes interesting.

This is a fun slasher flick with a lot of pay off. I enjoyed watching it and found myself laughing more than a few times. One of the more entertaining lines was, “Hey Beautiful,We just want to cut your f****** face off. Ok? That’s all. Is it such a big deal?” It comes from a scene where Jeremy (Jamie Ward) and Cameron (Chester Rushing) (two members of the support group) have Iris trapped in a closet and it is delivery so creepily and with such nonchalance, that psychopath feels like an understatement. The film is over the top at times and that’s what makes it so enjoyable, it recognizes what it is and doesn’t try to be more than that. It’s there for your enjoyment and there’s plenty to enjoy. This is the type of movie where you make a bowl of popcorn, turn off the lights, and settle in for a creepy ride that you could only experience with a movie. 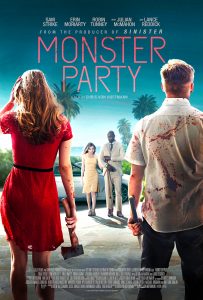 Movie description: Three thieves plan a daring heist posing as waiters at a fancy Malibu mansion dinner party in hopes of paying off an urgent debt. When their plan goes horribly wrong, the trio realizes the dinner guests are not as innocent as they seem and their simple cash grab becomes a violent and desperate battle to get out of the house alive.

I used to say that I hated documentaries and, lately, I’ve seen a lot of really good documentaries. I was really thinking that I was becoming a fan of the genre, then I watched All Light, […]