If you’re unfamiliar with the original Iron Sky film, go and watch this teaser for Iron Sky: The Coming Race to get an idea of the humour that you’ll encounter.  While I recommend seeing the original first (review coming soon), Iron Sky: The Coming Race is a great film on its own. You do need a bit of background on the first Iron Sky film to understand this one, so read the spoiler box below to get that background.

Spoiler
Iron Sky is a film about Nazis escaping Earth after World War II and establishing a base on the dark side of the moon. They return to Earth in 2018 in an attempt to take over the world. A fight breaks out, including an epic space battle, between the people of Earth and the Moon Nazis. The base is partially destroyed, but a few people survive.

The Coming Race kicks off as we learn that an aging and ill Renate Richter (Julia Dietze) from the original film is running the moon base and that the Earth is uninhabitable with the only remaining humans living on the moon. Christopher Kirby, who played James Washington is not in this film, but he and Renate had a daughter, Obi Washington, played by Lara Rossi, who is the focus of this film. The residents of the moon base are  struggling to survive with dwindling resources.

I gave this film 4.5 stars and I seriously considered a 5 star review. This isn’t an amazing film and probably falls into the ‘so bad it’s good’ category, but, oh man, the entertainment value is through the roof. While it’ll never win an award, it’s one of the most entertaining things I’ve seen in a long time. The film introduces us to an alien race, the Vril, who are apparently responsible for every rotten human that the Earth has encountered in its history. One scene I will never forget, and I apologize for the slight spoiler, is alien Steve Jobs licking a human bone. If you watched the teaser I linked above, you’ll see some of the Vril featured in the film.

Another great aspect of the film was Tom Green as Donald, the leader of a cult known as the Jobsists that worship the iPhone. With their faces always in their phones, they were an interesting allegory for the importance society places on social media and modern technology. I particularly enjoyed the iExCommunicate app, which I’m glad isn’t on my phone, and their reaction to finding Vril Steve Jobs.

There are so many parts of this movie that I want to talk about, but I don’t want to risk spoilers for anyone. So let me say this, if you enjoy subtle humour, ridiculous Sci-Fi, and an all around good time, you’ll want to check this film out. I have to admit that it’s much better than the original and so much smarter. I was surprised by how intelligent the film was. I can’t wait for more films in the Iron Sky universe, there’s already one called The Ark: An Iron Sky Story, which IMDB lists as being in post-production. I’d also love to see more from writer/director Timo Vuorensola. I think he’s the kind of guy that I’d love to sit down and have a beer with (or see speak at a con), he’s clearly got a lot of interesting ideas and some pretty cool stuff to say.

Iron Sky: The Coming Race is in theatres and on VOD today. Check it out! 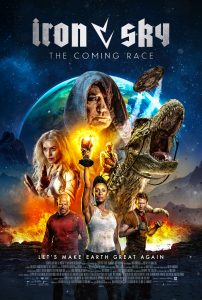 Movie description: Following the devastating aftermath of nuclear war on Earth, a former Nazi Moonbase has become the last refuge for mankind. Limited supplies and overpopulation threaten the survivors until Obi, the leader’s daughter, finds a map pointing to a power buried deep under Earth’s wasted surface that could save mankind or destroy it once and for all. When an old enemy leads our heroes on an adventure into the Hollow Earth, they must fight an ancient shapeshifting reptilian race to save humanity.