This movie has been sitting on my Netflix list for a little while now and I decided it finally time to give it a go. The premise was interesting… an alcoholic, struggling writer that appears to be well past his prime picks up a drifter outside a small town and brings him to his cabin to wash up and have a meal as repayment for breaking up a potential fight in an earlier scene. This story is set against an already established backdrop of woman going missing. All three primary cast members Antonio Banderas, Jonathan Rhys Meyers, and Piper Perabo do a great job. When I first saw the trailer, I thought that Antonio Banderas had resorted to the Steven Seagal style of direct-to-DVD cheap action flicks. Instead, I got an edge-of-my-seat thriller that kept me guessing until the very end. As the movie concluded, I was awestruck at how amazing it was… then, it continued with an additional minute of footage and this 4, maybe 4.5 star, movie was relegated down to 3.5 stars. This is a movie that you want to see without hearing spoilers to get the full experience.

Banderas plays an alcoholic writer, Paul, who has lost his wife and is struggling to put pen to paper. His publisher is calling for pages, he can’t pay for his groceries, and he’s working with a real estate agent, Laura (Perabo), to sell his house. He comes across as the epitome of crotchety. While on the way to meet his Laura at a diner, he races past a slow moving transport, yelling at the driver. In traditional movie fashion, this driver surfaces at the diner and a fight is brewing when a drifter, Jack (Jonathan Rhys Meyers), takes control of the situation and removes the truck driver. Later, while driving home, Paul spot Jack walking down the road and offers him a ride. This ride turns into a place to stay and a hot meal.

Jack ends up staying longer than expecting, inserting himself further and further into Paul’s life including forcing him to sober up and focus on his writing. This insertion becomes more and more forceful and the movie gives off strong Misery vibes while continuing to tell the story of Paul and Jack, including the movie’s titular reference. As the house guest becomes captor, the viewer begins to question Jack’s mental stability and moves closer and closer to the edge of their seat.

To go any further at this point, would spoil the movie. Suffice it to say that I would recommend accepting that the movie ends about one minute earlier than it does. It takes an amazing ending and attempts to undo it. I’ve yet to figure out what the writers and director were thinking with their choice. It was a clear mistake and detrimental to the movie. It should not, however, stop you from enjoying an incredible movie that was, until the final scenes, well written and well acted. 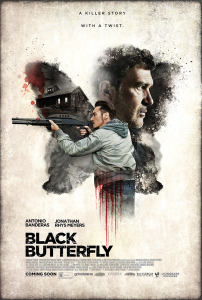 Movie description: The interactions between a mysterious drifter and a struggling writer at a cabin outside a small town, set against a backdrop of disappearances.