Imagine that your world was out of control. Every few minutes, you’ve moved forward another year. You miss all of the moments of your life except for those few minutes when you get a chance to observe the path your life is on, based on actions that you don’t control. You see how the past year of your life impacted people in jumps rather than as a normal progression of actions and reactions. Long Story Short looks at this. It challenges the concept that we’ve been desensitized to our own actions and decisions, that seeing the outcome of a year of poor choices without experiencing those choices being made will act as a wake-up call to change our ways. And it is brilliant.

In Long Story Short, we follow Teddy (Rafe Spall) on a truly messed up journey. Teddy’s biggest problem is that he is focused on work and everything else can happen “later.” After his wedding, Teddy goes to sleep only to wake up on his first wedding anniversary and discover that his wife, Leanne (Zahra Newman), is pregnant. From here, Teddy finds himself jumping forward and experiencing a brief period of time on his anniversary each year. He sees how the path he was on impacts those around him and how “later” isn’t always an option.

Here’s the thing – the film is billed as a romantic comedy and, it ultimately is, but it’s not for the faint of heart. The film left both my wife and I in tears and it gets pretty deep and dark at times. Consider it a bumpy ride on Teddy’s path to enlightenment.

It’s hard to talk about a film where every few minutes represent another year and a huge change to the story, so, instead, I want to talk about the emotion of the film. As I said, the film brought me to tears. I think that the messaging in this film is important. It highlights the importance of the adage, “Don’t put off until tomorrow what you can do today.” We live our lives every day, so we don’t see the incremental changes driven by our choices. Imagine if you woke up tomorrow and were shown a snapshot of your life a year in the future or two years in the future or more. Would you make changes to your life as you currently live it? Are you accomplishing everything you want to? Are you loving everyone you should? Are you telling the people you love that you love them?

This movie is about more than entertainment, although it is highly entertaining. This film is much more philosophical than I expected, it has a deeper message that really deserves further thought. Are you doing things that make you unhappy? Are you doing things that make others unhappy? Are you living your best life? I, for one, constantly say, “I’ll do that later.” Often, later never comes. For me, at least, this movie was about that… it was thought-provoking and made me more introspective than I’ve been in a long time.

This may be a much deeper movie review than I intended it to be… then again maybe it’s entirely superficial and the film just has me feeling like it is deeper than it really is. Either way, Long Story Short is worthy of your time whether simply as a form of entertainment or as a tool to drive self-reflection. It is, simply put, a great film.

Long Story Short will be released in theatres and On Demand and Digital on July 2. 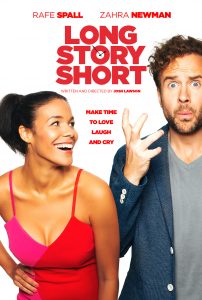 Movie description: Serial procrastinator Teddy (Rafe Spall) wakes up the morning after his wedding to discover that every few minutes he's jumping forward to the next year of his life. Watching his world fall apart, Teddy must make every second count if he is to win back the woman he loves in this feel good comedy about second chances.