The first thing I noticed about Bumblebee is that the action scenes did not have the signature Michael Bay touch. I could tell what was going on without a whirlwind of motion blur. This was a pleasant change from previous movies in the Transformers franchise. Overall, I really enjoyed this film. Bumblebee has always been a fun character and getting his backstory added a lot to the series. Having Hailee Steinfeld and John Cena in starring roles definitely didn’t hurt either.

The movie takes us back to the battle on Cybertron before the events of the previous Transformers films. As the Autobots are losing the fight, they disperse via escape pods and B-127 (Bumblebee) is sent to earth. On Earth, Bumblebee attracts the attention of John Cena’s Jack Burns and a chase ensues, culminating in a fight between Bumblebee and Blitzwing, a Decepticon. Sometime later, Charlie (Hailee Steinfeld) finds Bumblebee as a Volkswagon Beetle and from here we get our classic Transformers film… good guys vs bad guys with humans getting in the way.

I thought that the Charlie/Bumblebee interaction was really great and loved the “lost puppy” feel of Bumblebee. The scene where they first meet is quite touching and really cute. When Bumblebee figures out how to communicate, we get another great scene. The individuals responsible for selecting the songs did a great job. On top of the cute moments, there were a couple of times in the film where I laughed out loud, but mostly this film is just a good action movie.

Jorge Lendeborg Jr. was great as Memo and I love seeing Pamela Adlon on screen in anything. This movie felt well cast and I enjoyed everyone in their roles. Even Jason Drucker as Charlie’s brother Otis did a great job of elevating the movie by bringing a real sense of sibling interaction to the screen.

At the end of the day, Bumblebee is a great movie. It’s an entertaining investment of time and money. I would say that this is one of the better movies and I really hope they pursue Bumblebee further as a character, perhaps reuniting he and Charlie in some way in the story line. 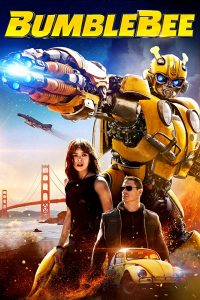 Movie description: Cybertron has fallen. When Optimus Prime sends Bumblebee to defend Earth, his journey to become a hero begins. Charlie Watson (Hailee Steinfeld), a teenager trying to find her place in the world, discovers and repairs the battle-scarred robot, who’s disguised as a Volkswagen Beetle. As the Decepticons hunt down the surviving Autobots with the help of a secret agency led by Agent Burns (John Cena), Bumblebee and Charlie team up to protect the world in an action-packed adventure that’s fun for the whole family.