Let the week of Hallmark movies continue! This time I watched Love at Sea starring Alexa and Carlos PenaVega. Alexa is probably still best known for Spy Kids and Carlos for Big Time Rush, my wife and I, however, fell in love with them on Dancing with the Stars. As I’ve mentioned before, my wife is anti-RomCom, so this one was all me.

When you take a beautiful couple that is clearly head-over-heels in love, you’ve got a RomCom recipe for success. The on-screen chemistry was almost overpowering from the get go. While I felt the story was slightly weaker than Love in Design, the real world chemistry made up for it. One downside to casting like this is that the match becomes obvious very quickly. For a brief moment, I expected Alexa’s character, Olivia Grayham, to end up with Miles Webster (played by Edward Finlay); then I smacked my forehead as I realized that the real life couple would end up together. I hadn’t seen any trailers or previews for this, but watching the advertising afterwards it was very clear that there was never any intention of a ‘who will she pick’ scenario playing out. It might be an interesting twist for a future movie to have things play out differently, so that the expected coupling never happens.

I’ve seen a few online complaints that the movie felt like a giant ad for Royal Caribbean, but I didn’t feel that way. In fact, if I had been asked which company’s cruise ship they were on, I wouldn’t have been able to even guess. I suppose if you go into a movie looking to nitpick the little things, this might stand out – I, on the other hand, look to suspend everything and simply live in the movie.

One of the weaker scenes for me was the cooking competition between Olivia and Carlos’ character, Tony Rieves. I can’t put my finger on exactly why I didn’t enjoy it – perhaps it was the fake accents – but I found my attention waning. This passed, however, and I finished out the movie with a smile on my face. On the flip side, I really enjoyed Tony singing in the lounge, as well as the hot and cold relationship that Olivia and Tony initially experienced. It can be difficult with these movies to avoid being too predictable, since everyone tends to know how they’ll end, but I feel like they did a good job at keeping us from determining exactly where Olivia and Tony would end up. I always laugh when someone questions how I can watch RomComs because they “always end so predictably” and then they turn around and watch back-to-back 80’s action movies – because the good guy never almost dies before ultimately beating the bad guy and spouting some cheesy catchphrase.

At the end of the day, you know what you’re getting when you turn on this movie – a couple hours of distraction that will put a smile on your face and some “dust” in your eyes. Thankfully, like Love in Design, this one wasn’t too hard on the “allergies”, but I did find a little “dust” snuck in during a few of the cornier moments. I thought the ending to this one was really cute and could definitely see myself sitting down to watch it again. 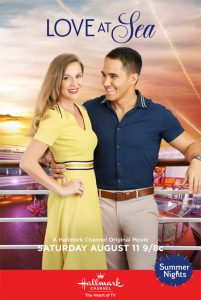 Movie description: It’s been a year since Olivia Grayham (Alexa PenaVega), a child of the hotel business, struck out on her own as an event planner. It’s been a struggle but she’s finally poised for a major career boost thanks to her best friend Alexandra (Melissa Caracache), who is taking her wildly popular YouTube lifestyle series onto the high seas for a Caribbean cruise. Tasked with organizing a multifaceted event for the fans onboard and online, Olivia has plotted the journey down to the last detail and planned for every possible contingency, or so she believes. She’s no sooner onboard than she faces her first curveball: the ship’s longtime cruise director has been reassigned and instead she will be working with his second-in-command, Tony Rieves (Carlos PenaVega), who has already begun putting his stamp on the ship’s activities. With no option but to adjust to each unexpected development that comes her way, Olivia realizes that there are some things that simply can’t be planned or anticipated – like falling love.

I went into Ride the Eagle with very high expectations. I think if I’d expected less, I could have easily called this a 4.5-star or even a 5-star film. Honestly, I still really enjoyed the film, […]

Sweetie, You Won’t Believe It

For years, I have tried to attend the Toronto After Dark Film Festival. I’ve had tickets to numerous movies, but scheduling has always gotten in the way. This year, however, with the festival online, I’m […]