I love TV and movies… I guess you’d have to expect that given that I run this website. So, when I heard that a movie featured the stars of Prison Break (William Fichtner), Sons of Anarchy (Kim Coates), and Lost (Harold Perrineau), I knew that I had to see it. The fact that was the directorial debut of William Fichtner, who also co-wrote the film, was just the icing on the cake.

The movie is centred around two friends, Ted (William Fichtner) and Hilde (Kim Coates). I’ve always been impressed by William Fichtner’s acting, but Kim Coates is an actor that I absolutely love seeing. He was great in Goon and he was one of my favourites in Sons of Anarchy. One of my biggest disappointments will forever be not seeing him on stage in Toronto as Rooster Byron in Jerusalem. These two men have an amazing friendship in the film, the type of friendship that you can only hope to have at their age in today’s digital society. A movie about two life long friends that remain so close would have been enough, but the movie adds a decent mystery to be solved – just enough to keep you invested and wanting to find out where things go.

The mystery comes to us in the form of Harold Perrineau and the movie takes a rather unexpected twist. It is a twist that works, but one I won’t spoil here. The film also picks up a bit of comedy from Brad William Henke as Chip. It’s hard not to giggle whenever the character speaks, even if he is somewhat unlikable. The rest of the cast is very much there just to support Fichtner and Coates, helping paint a picture of their home lives and day to day activities.

In the film, the two men take a risk to help someone in need and a minor point within this action is where the film lost points with me. A lot of the movie involves a very old piece of paper and both Ted and Hilde are constantly taking the paper out of plastic and holding it in their hands. I’m not a museum curator, but I’m sure curators around the world would weep if they ever saw a document handled in this way. This was one of those “movie stupid” actions that was hard to ignore. It felt like leaving the paper in plastic for the safety of the item just made sense (or taking a picture of the document with a phone) and constantly removing it didn’t change how they could interact with the document. I know this is a small problem, but it happens so frequently that it starts to stand out.

Even with that ongoing bit of “movie stupidity”, the film was decent to watch and entertaining enough to keep you interested and curious until the end. Bonus points as well for tying everything up with a nice, neat bow and offering a conclusion to the story. So many films these days want to remain open ended, which I often see as lazy story telling intended to avoid conflict with the viewer. In this film, however, we get a conclusion and an unexpected one given some of the character interactions earlier in the film.

If you’re a fan of Fichtner or Coates, this is a movie that you’ll definitely want to check out right away, otherwise I would call this film a rainy day sort of movie. That said, if you want to avoid having the mystery spoiled, I suggest watching it sooner rather than later. The movie will definitely lose some of its magic otherwise. Check it out in theatres and On Demand and Digital on November 8. 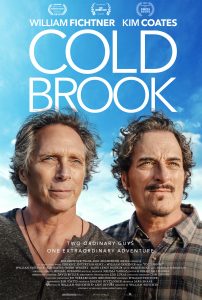 Movie description: COLD BROOK is the story of Ted & Hilde, two ordinary guys in a small town who embark on an extraordinary adventure and risk everything for a stranger in need. It's a story about coming home; something everyone, everywhere has an innate desire to do.