My wife is out of town, which means one thing: RomComs! As a huge fan of the genre – a genre that my wife hates – I was happy that I saw Danica McKellar’s tweet about this film just in time to start watching it’s Canadian premiere. Any film that stars Winnie Cooper is a hit in my books and I’ve still never seen a Hallmark Channel movie that I didn’t love.

I tend to enjoy Hallmark movies because I find them very cathartic. You know what you’re getting into before you start the film and while you may laugh or cry (or both) along the way, you know that you’ll smile at the end of the movie. Given the world we live in, I think that it is very important to be able to offer that to your viewers. You know that you’re getting cheese, but you don’t mind because that’s exactly what you want. It’s cute, it’s entertaining, it puts a smile on your face. I like to think of Hallmark movies as simple movies, they’re like sitting on a big ol’ porch with a glass of lemonade, watching the sun set over the fields and trees.

The concept of this film is pretty easy to follow. Hannah (Danica McKellar) hosts a TV show in which she remodels homes, but, after four seasons, the studio wants to shake things up. She returns to her hometown to remodel the towns 150 year old historic manor into a bed and breakfast, only to find that she’ll be “policed” by her ex-boyfriend, the towns architect. As the movie progresses toward the ultimate conclusion – a happy ending for everyone involved – a couple of scenes stand out. One of my favourites was a game of cornhole between Hannah and her ex, Jeff (Andrew W. Walker) to decide the outcome of an argument. The game only happened because no one had a coin for them to flip, their typical approach to solving arguments. The scene was cute and endearing and demonstrate a lot of chemistry between McKellar and Walker. Another standout scene was the quiet moment on the swings away from the crowd. This is a well-known image to hopeless romantics, that chance to steal a few solitary moments together against the hustle and bustle in the background (in this case, an early screening of an episode of Hannah’s show).

At the end of the day, I was glad that there were no real dips in this Hallmark movie and my prepared box of Kleenex was not required. Instead, I got to enjoy a pleasant ride and smile along the way. Definitely a shining example of the classic Hallmark movie. 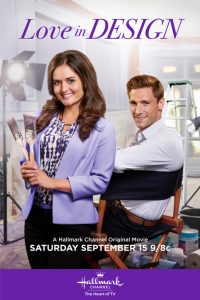 Movie description: Known for modernizing outdated spaces, Hannah’s show “Love in Design” is tasked with renovating a historic manor in her hometown. Hannah is up for the challenge, but she’s not ready to work with the overseeing architect, her ex-boyfriend Jeff, especially since their attraction hasn’t waned. In fact, the network loves their onscreen banter, and the town is wowed by a rough-cut episode. But revamping such an old building and having an opinionated ex on set is hard, and Hannah must make their Ying/Yang approaches blend. At the same time, maybe Jeff can reach beyond his comfort zone and overcome the distance between them.

Santa Claus is on the government payroll? Well he is in Fatman the latest movie from the Nelms Brothers, a writer/director team that previously gave us Waffle Street, which was an awesome film. This new Mel Gibson […]

One of the shorts showing at Toronto After Dark this year is 10-33. The film, with a 10 minute runtime, throws you into the action almost immediately and leaves you on the edge of your […]