This film was released a few weeks ago, but due to other commitments, I simply wasn’t able to watch it. That’s probably the most disappointing part of this review. I often say that I’ve discovered some of the best films I’ve ever seen thanks to the indie content I review and it holds true with this film. It is incredible. Writer/Director Susan Rodgers is a genius and this film shook me to my core, my wife had a fan going and I had to turn it away from me because of the chills the film gave me.

In Still the Water, we follow Jordie (Ry Barrett), a hockey player kicked off yet another team for a violent outburst, who is clearly on the run from something in his past, some demon he just can’t escape. Yet, without other options available, he has no choice but to return home to his small town on Prince Edward Island and turn to his family for help. The 100 minutes of film play out Jordie’s homecoming, his interactions with his brothers and his father. We learn, at least a little bit, about his demons and we see how his entire family has been impacted. While we’re experiencing a story of a quality typically reserved for good works of fiction, we’re reminded that no matter what you see on the outside, you never know someone’s past or their current situation.

I shot the film entirely on location with no built sets. This lends a real sense of place to Still The Water. The landscape is beautiful; I wanted my home, Prince Edward Island, to be a strong character in the story.

I was very happy to find this quote in the press notes, as the film feels like a small town. It doesn’t feel like set or a production. It feels like we’re getting a glimpse into the inner workings of an every day family, a family that struggles just like the rest of this. I think Rodgers decision to film in this way really lends credibility to the film, it makes me feel like I know these people. I want to grab a coffee with Jordie, I want to meet his family at a campfire to roast marshmallows… that’s the, for lack of a better word, vibe of the film and I love it.

The situation is complicated and relationships are very nuanced. In a world of Hollywood blockbusters that are more about flash than substance, this film was a nice change. This film was non-stop substance in the best possible way. It also contained what will forever be one of my favourite lines, “Hockey Rinks… They’re like Catholic churches, they’re always the same no matter where you land.” This movie had me on the edge of my seat, it had me wiping tears from the corners of my eyes, and it had me smiling. It was a rollercoaster of Canadian perfection. That, unfortunately, is the sad part. Canadian movies just don’t get the recognition they deserve. If this were a product of the US, of “Hollywood” – why do we still say that given how much production occurs elsewhere? – the accolades would be flowing for this film. Yet, it’s not even on the recommended films list for iTunes or Prime Video. Rodgers deserves a writing award for this film and Barrett deserves to be recognized for his performance. The entire cast is amazing, they felt like their characters… none of them felt like an actor trying to play down-to-earth – it just seemed real.

We also need to talk about the soundtrack. While I don’t buy CDs anymore, I would buy the soundtrack to this film on vinyl in a heartbeat. I often complain about bad music in films, but this was picture perfect. Every song fit the moment, and every lyric hit your soul. When everything is said and done, from dialogue to direction, from music to performance, this film was just top notch. It’s a story that I’ll never forget, because as I watched it, I felt like I was there in Malpeque with the MacAulay family.

I’m not sure my continued gushing is beneficial and I can’t think of a negative aspect of the film, so let me leave you with the recommendation that you see this film ASAP. It is one of the finest films I’ve seen in 2021 and it touched me in a way that few films ever have. I can’t quite explain it, but it left me feeling the way I did when I watched My Girl (and again when I read the novel) or when I watched A Walk to Remember. It has nothing in common with those films, but both of them created experiences that left a lasting mark on my soul and I feel like this movie has as well.

Still the Water was released on Digital and On Demand on April 27. 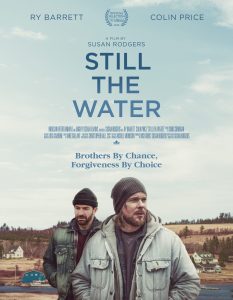 Movie description: All eyes are on Jordie MacAulay (Ry Barrett) when he returns to his small hometown on Prince Edward Island after playing semi-pro hockey in Alberta. Usually in an alcoholic haze, he’s kicked off his team after injuring a player. With no friends, no job, and no respect, in desperation he turns to his family for help. Still the Water is a dramatic feature film about second chances. A family struggles with a painful past, secrets, a love affair that is ripping them apart, and their old sanctuary – the hockey rink – that brings them back from the brink.

Growing up in Canada, and specifically Northern Ontario, hockey is a way of life. My bookshelf was filled with hockey stats books, my closet was full of hockey cards, and my parents froze in empty […]