Joe Bell tells the true story of Joe Bell, a man from La Grande, Oregon, who quits his job at the mill to walk across America to New York City to speak out against bullying. A number of the film’s viewers will likely know the story, those that don’t may be caught off-guard. I don’t want to spoil the story, so I’ll avoid talking about specifics but that also makes the film difficult to discuss. If you do not know the story and trust me, I would suggest simply stopping now and watching the film. If not, I’ll do my best to avoid spoilers for you.

I started with a quote from the director because I think that we’re at a point where we could all stand to look a little more deeply at ourselves. This movie will likely be a source of introspection for most. I know that it had me thinking afterward, it’s hard not to have a million things rush through your head as you watch this film. It is a film about redemption, about finding common ground, and about trying a little harder to understand one another. Mark Wahlberg, who plays Joe Bell, summed it up quite nicely.

From the minute I read the script I thought this was a timely story that needed to be told. Joe Bell is a man who didn’t understand certain things about the world until he was faced with them in his own life, as a father. As a parent myself, I know how much fatherhood can change a man. This is a story told from the heart of a man who walked from town to town to reach other families. It shows how a series of small steps can add up and make a big difference for anyone who needs to know they are loved and accepted.

In the film, we see a man (Wahlberg) in pain – a man that has clearly experienced trauma – and, in an effort to heal from that trauma, he embarks on an incredible journey. A journey that changed the lives of others and now, via this film, will likely impact so many more. This film requires that you have tissues nearby, you will use them. It also requires that you be capable of feeling empathy. This is not a Friday night date night film, it’s also not a big bowl of popcorn with the kids on the couch for entertainment type of film. This film is a gut punch and, unfortunately, it’s also going to kick you when you’re down.

One thing that we can talk about is the acting. The entire cast delivered incredible performances. Mark Wahlberg as Joe Bell and Reid Miller as his son Jadin were incredible together on screen. I’m looking forward to seeing Miller in more films. Similarly, Gary Sinise had a remarkable onscreen interaction with Wahlberg, an interaction that I found very touching and hope would be eye opening for some of those fathers that may be struggling with their toxic masculinity. While Wahlberg was the star of the film, we would be remiss to not discuss Connie Britton. Her performance was amazing and I found her to be almost unrecognizable. Her role didn’t get the screen time of Wahlberg or Miller, but it was critical to the execution of the film and every scene, even when it was just her voice on a telephone, was played brilliantly.

At the end of the day, this is, as I said above, a redemption story. It is about accepting the people you love, protecting them, and telling them that you love them. It’s about how quickly things can change and how devastating those changes can be. Watching the film, it is, at times, difficult and painful to realize it is a true story. It is, however, one that needed to be told and it was told so well. The actors and director did an amazing job and some of that credit needs to be expanded to the writing team of Diana Ossana and the late Larry McMurtry. Together they wrote Brokeback Mountain and, as they did with that film, they filled this one with emotion that hits you in your soul. This appears to be the last story that McMurtry ever wrote and it is written so beautifully that I want to explore his earlier works.

Joe Bell will be released in theatres on July 23. 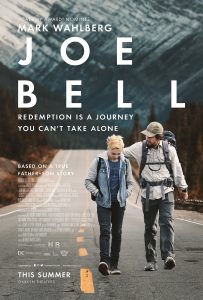 Movie description: From filmmaker Reinaldo Marcus Green (MONSTERS AND MEN; upcoming KING RICHARD), along with the Academy Award-winning writing team behind BROKEBACK MOUNTAIN (Diana Ossana & Larry McMurtry) and Academy Award nominee Mark Wahlberg, JOE BELL tells the intimate and emotional true story of an Oregonian father who pays tribute to his gay teenage son Jadin, embarking on a self-reflective walk across America to speak his heart to heartland citizens about the real and terrifying costs of bullying.