Pleasure is probably not a film you want to watch with your family. I watched it with my wife, but I couldn’t image if one of my parents or siblings had been around. Awkward would have been an understatement. Pleasure is, however, an absolutely fascinating film that I highly recommend watching. With that recommendation, however, I want to also provide a warning. There’s a reason why Pleasure is listed everywhere as NR (Not Rated). It is a film about the porn industry. It is not a documentary, but it is impossible to talk about adult films without some content appearing on screen. Additionally, there are scenes that dive into some of the darker aspects of the industry and they are uncomfortable to watch and, for some, will likely be triggering.

At this point, you may be wondering why I would recommend the film and why I gave it 5-stars. The simple answer is that I was fascinated. The film is polished and well done. The script was well written and the dialogue felt natural. There wasn’t a single moment where I was curious to know what random Bulgarian company was used for post processing like I’ve wondered in other films. I didn’t have to jump for my remote to adjust the volume due to wild fluctuations. It didn’t look like it was filmed on flip phone someone found in a box marked “2004.” It felt like a studio quality film and it told a story that drew me in. I wanted to know what happened next and I cared about the main character, Bella Cherry, played by Sofia Kappel.

That’s actually where I want to really start talking about the film. Kappel was incredible. I actually could not believe that this was her first acting role. When I read that in the press notes, I was shocked. She carries the film and is believable every step of the way. I felt her fear and pain, her joy and excitement, and everything in between. She conveyed it all so well and really pulls the viewer into the film. She is Pleasure. I want to reiterate that Kappel is a pleasure to watch (pun intended) because she seems to live and breathe the role.

The film is an emotional rollercoaster. You will laugh, you will gasp in terror, you will grimace, and you’ll feel sorrow. Your heart will break for Bella Cherry at times and she’ll have you laughing up a storm a few moments later. Don’t get me wrong, you will feel uncomfortable, but then you’ll be fascinated as you watch the story unfold. It was difficult for me to figure out just how I wanted to discuss this film. There are a lot of people I know that I don’t think would understand it and who would be unwilling to watch it. I think it is a mistake to let a little discomfort prevent viewing this film. Instead, treat it like a dramatic window into an industry you’ve likely never seen presented this way. The film had multiple script consultants and was filled with adult film stars, which makes me assume that it was a reasonably accurate portrayal of the industry. Even if it wasn’t, it was a well written and well presented story. It may not be the film escapism that you’re looking for, but if you want a harsh, dramatic film with plenty of comedic moments, this is the film for you.

I don’t want to spoil anything that happens, but I will say this. The film is a brilliant character study. The growth and metamorphosis of Bella Cherry is intriguing. The story really speaks to how lived experiences change you. It is a deep dive into how you can end up fighting your own nature and how past experience can motivate a decision you make in the moment. Bella Cherry is, quite often, a walking contradiction. She changes so fast that you’ll find yourself suffering from whiplash, but that’s part of what makes it feel so real… visceral might just be the best way to describe the feelings that it evokes.

Whether it is your cup of tea or not, it is a film that is well worth watching.

Pleasure will be in theaters on May 13. 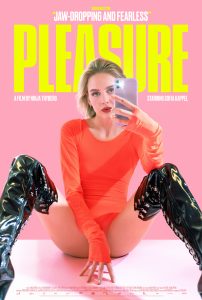 There are only two ways to live your life. One is as though nothing is a miracle. The other is as though everything is… This quote, often attributed to Albert Einstein, starts off The Secret: […]