It has been a long time since I was last equal parts excited and depressed going into a movie. However, that’s exactly how I felt going into Let Him Go. On one hand, you have Kevin Costner aka Eliot Ness, Crash Davis, Ray Kinsella, Lieutenant Dunbar, Robin Hood, Wyatt Earp, Charley Waite, Beau Burroughs, Denny Davies, Earl Brooks, Bud Johnson, Jonathan Kent, Larry Bloom, and Frank Hamer. Costner is a man who has played countless iconic characters over his career and I’ve never walked away from a film disappointed. In fact, he’s the star of several of my favourite movies of all time including The Untouchables and Mr. Brooks. On the other hand, you have Diane Lane. Lane is a great actress, it is evident in this film, but I still haven’t forgiven her for Untraceable – I’m still waiting for someone to mail me $10 and an apology for sitting through that movie in theatres. Other than Man of Steel and Batman v Superman: Dawn of Justice, which she isn’t the focus of, I’ve avoided watching her movies ever since. Hopefully this helps to identify any biases I had going into the film.

Let Him Go is an interesting movie that is difficult for me to discuss without spoiling it, but let’s see what I can do. In the film, set in the 60s, Lane (Margaret) and Costner (George) lose their son and, eventually, his widow, Lorna (played by Kayli Carter), remarries into the Weboy family. One day, Margaret sees Lorna, her son, and her new husband in town and is appalled to see both Lorna and her son struck by Lorna’s new husband. When Margaret goes to check in on the family, she discovers that they have fled in the night, moving back to where the Weboy clan lives. Margaret is determined to find them and bring her grandson home and decides she’s going with or without George. The rest of the story plays out from this point.

The film is filled with a talented supporting cast including Jeffrey Donovan, Booboo Stewart, and Lesley Manville. It was great to see Donovan back on screen as Burn Notice was one of my favourite TV shows. Every single member of the cast does an amazing job on screen, I was actually surprised that there were no weak spots among them. The scenes with Lane and Costner shine and they both portray their characters as only skilled thespians could. Stewart as Peter Dragswolf serves an important role in the film, not only in the advancement of the plot but also helping to shine a light on a dark part of the United States and Canada’s history. Lesley Manville, as Blanche Weboy, head of the family, is frightening in a way that’s difficult to describe. While not physically intimidating, I’d prefer to find myself in a cage with a tiger rather than facing off against her.

At the end of the day, I think the meaning of the title Let Him Go is debatable and ultimately it does appear to have multiple meanings. Are they talking about Margaret and George letting their son go, Margaret letting her grandson go, or a half dozen other relationships that it could apply to. I have my own theories, but to discuss them would involve spoiling the movie, which I won’t do. Those theories are where my bias plays in, but I have to give credit to Lane… she was brilliant in this film. I’ll be excited to discuss this film with others when they watch it, if you would be interested in a Zoom conversation about the movie after you watch it, please let me know… I’d love to host it.

Finally, let me just say that the film is a slow burn. While the trailer makes the movie look like an action packed western thriller, it is actually 90 minutes of very little progression and about 25 minutes of action. That doesn’t change my recommendation, I definitely enjoyed the movie… although I did not enjoy the conclusion.

Focus Features will release Let Him Go in theatres on November 6. 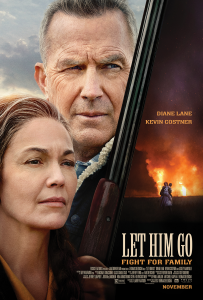 Movie description: Following the loss of their son, retired sheriff George Blackledge (Kevin Costner) and his wife Margaret (Diane Lane) leave their Montana ranch to rescue their young grandson from the clutches of a dangerous family living off the grid in the Dakotas, headed by matriarch Blanche Weboy. When they discover the Weboys have no intention of letting the child go, George and Margaret are left with no choice but to fight for their family.

Mystery, intrigue, and two of Hollywood’s best leading women – A Simple Favor is full of twists and turns and rather enjoyable to watch. When a hyper-involved mom befriends the “cool” mom of one of […]

Ida Red has a highly recognizable cast. That’s probably the biggest draw to the film because the synopsis doesn’t do it justice. The film is actually pretty good, but you need to dig a little […]