When I look at movies, there are things that will often make me do a double take. For example, when I first heard that Simon Pegg would play Scotty in the Star Trek reboot, I was surprised because I’d always considered him a purely comedic actor and, while Scotty can be humorous, it was not the role I expected to see him in. I was even more surprised when I saw that Simon Pegg was one of the stars of a thriller entitled Inheritance. I immediately knew that I had to see the film. After watching it, I can say that Simon Pegg is a much more talented actor than I thought he was. I knew he was amazing in comedic movies and he did a great job in franchises like Star Trek and Mission: Impossible, but I didn’t expect this performance out of him. It was really quite good.

Inheritance  is a straightforward story until it isn’t and then it’s a straightforward story until it isn’t, again. The family patriarch dies and, while the family grieves, they seem more concerned about the inheritance. While his wife inherits most of the families holdings, their eldest child, daughter Lauren (Lily Collins) is left $1 million and her younger brother, William (Chace Crawford) is left $20 million. You see, he’s a politician and she’s just a lowly district attorney upholding the law; not quite the prestigious career her father expected for her. Of course, mother Catherine (Connie Nielsen) has to try and set things straight by giving her daughter a cheque to match the inheritance that William received. This is mostly background, but it helps you understand the family’s pretentious existence – the privilege they enjoy.

We quickly learn, however, that Lauren’s inheritance isn’t just the money, her father has also “gifted” her a dark secret in the form of a man (Simon Pegg) chained in a fallout shelter at the family’s summer home. When they first meet, the man begs Lauren to release him, but she wants to know why he’s locked up. As the movie progresses, he explains the story and she’s left to make a decision. Should she release him, continue to detain him, or kill him? You’ll have to watch the movie to find out more.

I thought the story and characters were quite interesting, but the problem suffered from a fatal flaw that I keep encountering – pacing. The movie starts off quickly; before I realized it, the first 45 minutes had passed and it still felt like I had just started the film. Similarly, the last 30 minutes of the movie moved along like a speeding bullet. There were, however, about 35 minutes in the middle of the film that felt slow – like the film had run out of gas and was letting off the throttle in order to make it to the finish line. I dislike this pacing in films; the mid-film slump is painful and makes it really hard to stay interested, especially when a film starts off strong. I am glad that the film had a strong finish and equally strong acting, as that helped me power through the slump, otherwise it may have been a viewing nightmare.

The film is available on Digital and On Demand on May 22. 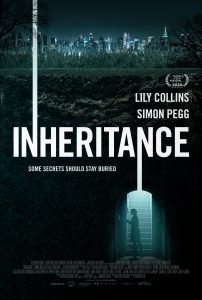 Movie description: A patriarch of a wealthy and powerful family suddenly passes away, leaving his wife and daughter with a shocking secret inheritance that threatens to unravel and destroy their lives.

I recorded the broadcast of this on Sunday night with the intention of watching it on Friday. After watching Twitter blow up with negative reactions, I decided to watch the film sooner. Unfortunately, being Canadian, […]

In what might be a first for me… I am not sure how to rate this film. I do, however, think that it is important that I include this note from the writer/director before I […]