This needs to be said right off the bat – this film was inspired by a true story. I don’t think that can be emphasized enough and, as such, needs to be mentioned out of the gate.

When I was 19 my dad and I got into a huge fight and I decided I was never speaking with him again. I blocked him on my phone, online, everything. Weeks later I got a friend request from a pretty girl on Facebook and I was thrilled. She was perfect. We shared the same interests, she was gorgeous… Things were looking up. Unfortunately, she was also my dad. He had created the account to make sure I was okay.

I Love My Dad stars Patton Oswalt as Chuck, a father who catfishes his son, Franklin (James Morosini). The film is funny, disturbing, and, at times, very sweet. Oh yeah, did I mention disturbing? You WILL feel uncomfortable watching this movie. There were moments while watching this film that my wife and I looked at each other and just shook our heads. There was a lot of yelling, “Oh My God!” and “No, No, No!” at the TV. Morosini expected this and describes it really well.

I’ve long been a fan of discomfort comedy. I laugh the hardest when I’m the most uncomfortable. A film about a father essentially catfishing his son could quickly turn dark, so we often found ourselves playing on a razor’s edge. We’ve all made questionable, impulsive decisions. By embodying the father’s avatar from the son’s perspective, I wanted audiences to be both cheering for and against this terrible plan. It was an exercise in empathy to try and get an audience to understand why someone could do something so wrong for the right reasons. Creepiness comes from not knowing, so as long as I could always make it clear why Chuck is catfishing his son, we’ll be on his side and almost shocked we’re rooting for him. Luckily, I also had a phenomenal cast to achieve this effect.

I think it was important to quote Morosini here because of his mention of the phenomenal cast. Patton Oswalt is always brilliant. I love that he appears in pretty much everything these days because he always brings everything to the role and I’m a huge fan. Morosini did a great job as Franklin as well. The two bring us absolutely hilarious scenes once Franklin discovers the catfishing and we get a fresh look at prior scenes. You’ll understand what I mean when you watch the film. The supporting cast is also fantastic. Claudia Sulewski plays Becca, the waitress whose name and pictures Chuck co-opts for the catfishing. Lil Rel Howery plays Chuck’s best friend and Rachel Dratch plays Chuck’s coworker and “love interest” (although that’s not the right phrasing). These are two comedic greats in supporting roles that add so much to the film – Dratch, in particular, provides some of the biggest laughs of the film. I would say that Sulewski was the biggest unknown in the film and she was incredible – playing what felt like a caricature of a real person perfectly.

One thing that I really want to give this film credit for is the use of “in person” interaction. In the past, films simply showed the telephone call between two individuals. These days, as people use text more and more, even films without subtitles often require substantial amounts of reading. While this is done well a lot of the time, sometimes it is very painful. Much of this film, to add to the comedy, uses real interactions where Franklin and (fake) Becca appear in their own world regardless of what is really going on around them. This is a great way to handle this and elevates the film to a new level.

I Love My Dad was released in theaters on August 5 and on demand August 12. 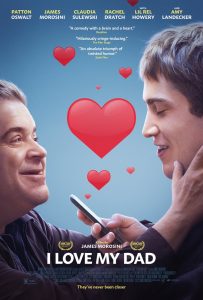 Movie title: I Love My Dad

Movie description: Inspired by writer, director, and star James Morosini’s true life experience, I LOVE MY DAD follows Chuck (Patton Oswalt), a hopelessly estranged father who desperately wants to reconnect with his troubled son, Franklin (Morosini). Blocked on social media and concerned for his son’s life, Chuck impersonates a waitress online and starts checking in with Franklin. But things begin to spiral when Franklin falls for this imaginary girl (Claudia Sulewski) and wants nothing more than to meet her in person, as Chuck has inadvertently catfished his own son. A thrilling comedy with an unexpected twist, I LOVE MY DAD also stars Rachel Dratch, Lil Rel Howery, Amy Landecker and Ricky Velez.

O’Doyle Rules! That line is randomly yelled in the film and it made me smile. I loved Hubie Halloween, but when that line was said it brought me back to classic Sandler films. I literally yelled, […]

When I turn on a horror movie, I’m not looking for much other than to be scared and entertained. The Shed eventually succeeded in providing both of these elements, but it was trying at times to […]