I review films and TV shows and I love to read books and comic books, but the greatest form of entertainment is the musical. There is nothing better than being a part of an audience experiencing a musical. Musicals fall into two categories – the stage musical (New York’s Broadway, London’s West End, and Toronto’s Theatre District) and movie musicals (The Lion King, The Rocky Horror Picture Show, and the Little Shop of Horrors). We see a lot of cross over – The movie Waitress became a musical, The musical Rent became a movie – and these crossovers are usually amazing. When musicals step onto the big screen, there are two ways that this can be accomplished – the live stage musical is filmed from multiple angles and cut together for release or a screenplay is written and a proper movie is made. Plenty of musicals have seen both treatments – Rent, for example, was released as a movie in 2005 and as Rent: Filmed Live on Broadway in 2008. Both of these methods of release work, but there’s something special about a live stage performance that has been perfectly cut together that allows you to see the stage version in all of its glory. There’s just something about the energy of the audience, the power of the vocals, and the outstanding performances of stage performers that outshines your typical movie musical. At the end of the day, however, it doesn’t matter what format it is in, the power of the musical is undeniable – it has that ability to provide cathartic release regardless of the subject matter, to bring a smile to your face and a tap to your toes under any circumstances, and gives the viewer a chance to recharge and draw in the energy of the cast and audience. The musical is, to put it simply, perfection.

We’re lucky enough to live in a time when so many of our favourite properties are appearing on stage as musicals. Don’t get me wrong, I love original musicals, but I also love seeing something I loved off stage suddenly appear on stage. This is what happened with Heathers: The Musical. The film is a classic for my generation, a movie that we’ve all heard quoted or quoted ourselves. It embodies our teen angst and provides an entertaining look at how quickly things can go south. I’ve tried for years to see the musical, even having tickets to a performance once before plans fell through, but it has always been on my list. When I heard that The Roku Channel was bringing the musical to screen, I was beyond excited and knew that I had to see the performance.

Heathers: The Musical was filmed in London at The Other Palace Theatre and the first thing that we need to talk about is the set, lighting, and performance quality. The cast was amazing. In fact, I’d go so far as to call them perfect. We tend to forget, however, that a perfect cast performing on the side of the road can only give us a good show. No matter how hard they try it won’t be perfect because there are a number of other elements that need to go into each production. The set design and lighting, two of those other elements, were perfect for this performance. The set and lighting designers should be very proud of themselves. All of this comes together under brilliant direction and editing, which is where many recorded stage versions often fall apart. Andy Fickman, however, brought this together beautifully. I felt like the camera knew exactly where I would look if I were sitting in the theatre, which gave me a perfect viewing experience. If I were to nitpick, there is a single moment that I would have changed. There is a moment where Ms. Fleming (played by Vicki Lee Taylor) points out three news cameras and, because they were filming the performance, points to actual cameras, eliciting a laugh from the audience. With the first camera, we get the shot of Ms. Fleming as she points at it, but with the subsequent cameras we see her from a different perspective. I would have loved to cut from camera one to camera two to camera three with the shot of her pointing at each one, but that is the only flaw I could find in how the film was cut together.

As I said, the cast was amazing. Ailsa Davidson was the perfect Veronica, at times even reminding me of Winona Ryder. Simon Gordon was great as J.D. although as much as I often saw Christian Slater’s J.D. in him, I also saw John Cusack’s Lloyd Dobler at times. The three Heathers – Maddison Firth (Heather Chandler), Vivian Panka (Heather Duke), and Teleri Hughes (Heather McNamara) – were incredible and in sync the entire time, which was fantastic to see. The remainder of the cast was equally impressive with Liam Doyle and Rory Whelan as Kurt and Ram scoring an impressive number of laughs out of the audience. Finally, there’s a scene involving Mhairi Angus, who plays Martha, and a motorized scooter that is perfectly timed. Her timing combined with the expression on her face is a minor moment in the overall musical, but it was memorable and well performed.

I’m gushing, but it was hard not to with this performance. It was a joy to watch from start to finish. I think part of that was the audience. You could feel the energy, love, and excitement that the audience had for the show the entire time and cuts to the laugh or cheering crowd were perfectly timed to provide an great viewing experience. If I were to nit pick in order to provide some critical commentary, I would say that the transitions used were less than ideal. There are times where it feels like cuts exist to insert potential commercial breaks, and a artistic rendering of the scene is drawn over the characters and scene before fading out. The musical cuts felt abrupt stopping and starting suddenly without fading the music or paying attention to where in the flow of the music they were. This was a bit of a jolt at times, but it didn’t ruin my opinion of the spectacular performance.

Since the story of Heathers is well established and I don’t want to spoil any of the amazing theatrical moments, I want to avoid saying too much about the show itself. What I will say, however, is how about those books! Once you watch the performance, you’ll know what I mean and, if you know where to get those, please let me know, I’d love to own one. I’m really hoping that they were sold at the merch stand for attendees of the performance, it is definitely one of the coolest stage props that I’ve seen.

Musicals are always a must see in my books and Heathers: The Musical is no exception. From start to finish, it is a dazzling performance that will keep you thoroughly entertained and excited for more.

Heathers: The Musical will premiere exclusively on The Roku Channel on September 16. 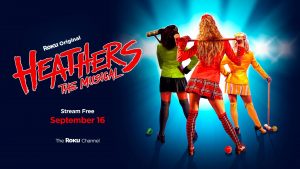 Movie description: Welcome to Westerberg High, where Veronica Sawyer is just another one of the nobodies dreaming of a better day. But when she’s unexpectedly taken under the wings of the three beautiful and impossibly cruel Heathers, her dreams of popularity finally start to come true. Until JD shows up – the mysterious teen rebel who teaches her that everyone fears being a nobody, but its murder being a somebody...