Hotel Artemis is a solid ‘middle of the pack’ action movie. There’s nothing bad about it, but the parts that are great, aren’t great enough to make it stand out. It is worth noting, however, that I may have some bias in the casting choices, that I’ll discuss later. The movie follows an underground, members-only hospital that caters to criminals. The hospital is run by The Nurse, played by Jodie Foster, and we get a glimpse into the hospital during a deadly riot over access to clean drinking water. The hospital’s orderly/security, Everest, is played by Dave Bautista and the hospital’s four patients are a foreign assassin – Nice played by Sofia Boutella, asshole businessman – Acapulco (Charlie Day), and sibling thieves – Waikiki (Sterling K. Brown) and Honolulu (Brian Tyree Henry). The hospital also treats the Wolf King (Jeff Goldblum) and a police officer, Morgan (Jenny Slate).

More than anything else, the trailer for Hotel Artemis deserves credit for a great misdirect. I watched the trailer several times and went in expecting a movie about thieves that steal the wrong thing and end up in a battle with a mob boss, the Wolf King, within the hospital. This was not the case at all. We live in a time when movie trailers spoil movies, they tell you way too much up front. So, it was refreshing to have a trailer point me in the wrong direction and to watch a movie realizing that I have no idea where the plot is actually going.

The casting is where the movie really warrants discussion. Jodie Foster was AMAZING! More than anything, this film was a reminder that she doesn’t act enough these days. This shouldn’t surprise anyone familiar with her work – The Silence of the Lambs, Contact, The Brave One, and so many others are all amazing films. Her posture and dialect stood out because of how unique she was on the screen and her portrayal of an agoraphobic was believable to me. Similarly, Dave Bautista was great. He does a great job whenever a film requires a character with equal parts stoicism and comic relief. The two of them as the hospital employees brought magic to the screen and I would have loved more of just “The Nurse and Her Orderly Show”. Sofia Boutella as the assassin named Nice was also great. Her character was one of the more entertaining aspects of the film.

Where the casting fell apart for me was Sterling K. Brown. He did a fine job with the role, it was neither awesome or awful but relatively middle of the road. As an aside, he, along with Justin Hartley and Chrissy Metz, are a group of actors I simply don’t enjoy seeing on TV or in film. I was excited for This is Us, a TV show that couldn’t have been more up my alley, starring two of my favourite people – Milo Ventimiglia and Mandy Moore. Instead of getting “The Milo and Mandy Show”, I got “The Milo and Mandy’s Three Whiny Children Show”. As such, I now tend to avoid them whenever I can. I don’t add this to bash This is Us, but rather to point out why I might not have enjoyed his performance as much as others might.

Jeff Goldblum and Zachary Quinto as a father/son mobster team were, simply put, ‘Meh’. I felt that Goldblum portrayed a very weak character, given he supposedly runs the city and Quinto admitted to wanting to emulate his father, but seemed to be nothing like him. At the same time, Charlie Day was under-utilized. It felt like the Acapulco role may have been written with him in mind, but I would have liked the character to have been a little more over the top, a little more “Charlie Day” for a lack of a better description.

At the end of the day, I wouldn’t rush out to pay $5.99 to rent this (although I already did) and I feel bad for people who paid to see it in the theatre. I would, however, take advantage of this during a $2.99 or $0.99 rental sale on iTunes and I would definitely add it to my queue on Netflix or a similar streaming service when it appears. It was decent for what it was with a few highlights, but it’s not worth serious monetary investment. 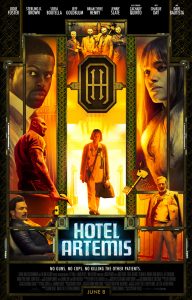