My Summer as a Goth was not a film I initially intended to review. When it showed up in my inbox with the tag line, “Tim Burton meets Valley Girl!” I was intrigued. Then I saw the poster and, I’m not sure why, but it gave me Twilight vibes, which turned me off the flick. However, when I saw it a second time, I read the synopsis and got caught up in one line. “My Summer as a Goth navigates Joey’s relationships with her new friends, her family and herself, and will resonate with anyone who survived the social alienation of adolescence—and that first summer heartbreak.” I was drawn to that and knew that I had to make time for the film, after all I’m a sucker for a good coming of age story.

We were really committed to doing a coming of age story that was freshened up a bit from what we were influenced by in the late 80s – the John Hughes era of coming of age film. We loved that authenticity in terms of casting and working with younger actors, that was something we wanted to do in our film (cast real teenagers) and we had that opportunity to do that. That was important to us.

If you look at those films of the 80s through today’s lens, there’s a lot of problems. There’s some situations that don’t really fly these days and aren’t really reflective of today’s youth. So, we wanted to update that and put our own take on the teenage coming of age genre.

I settled in to watch it and fell in love with the characters almost instantly. Natalie Shershow (Joey) is brilliant as the lead and I expect we’ll see her in many more films over the years. Equally impressive were the actors who played her grandparents, Fayra Teeters (Margaret) and Jonas Israel (Joseph). They were the films comic relief, with perfect delivery and amazing humour coming through every time they spoke. I asked writer/director Tara Johnson-Medinger about the pair during a call and she had nothing but praise for them.

They are just a hoot. They had so much fun doing this movie. When we brought them in together to do a chemistry read (you want to make sure your characters work well together), they just amplified what we had thought initially so much more. We were excited to bring that to screen and once we were in production, they’re such professionals that we were just able to zoom through a lot of their scenes. They’re very thoughtful and loved being a part of this film. They’ve both done a lot of theatre, so there’s just this grand performance that when you’re doing something for screen you want to pull back a little bit, but I think that helped amplify their energy.

The film focuses on Joey, a teenager whose father has passed and mother is occupying herself with a book tour for her latest novel, as she spends the summer with her grandparents. She is intrigued by the neighbour’s goth grandson, Victor (Jack Levis), and soon a romance starts. Victor is something else, he’s a manipulative narcissist and so many things I don’t want to write down. Suffice it to say that he is easy to hate and it is painful to watch Joey develop feelings for the worst kind of person. Hanging out with Victor and his friends, Joey changes her appearance and style as Victor treats her like a human doll. There are times when you will find yourself angry and yelling at the TV, I know that I did. Forgetting that the synopsis includes the text “that first summer heartbreak,” I was concerned about the direction the film would take.

I totally agree about the roller coaster ride that is Joey’s relationship with Victor, and it was important to us with this story that the female protagonist ended her story in a position of strength. I think a lot of people–especially teenagers–can get swept up in their relationships and lose sight of who they are, but I love that Joey ultimately finds a way to stand up for herself and create her own destiny.

Ultimately, however, I loved the story, the friendships, and the conclusion, so when I had the opportunity to sit down and speak with Tara, I was excited to get details on the story. I was surprised to learn that co-writer Brandon Lee Roberts, Tara’s high school best friend, brought her the script back in 2009 and, together, they spent years refining it – adding in a lot of elements of their own teenage years. I was equally surprised to learn that the film was shot over two years due to funding issues… given the high level of polish, it is hard to believe that there were funding issues or a time gap. This is, surprisingly, Johnson-Medinger’s feature film directorial debut and it definitely didn’t feel like one.

It wasn’t something that I expected to do, I’ve been producing, I love producing, but when the opportunity came up to step into the director’s chair I just went for it. It was a natural progression and because I’ve had that experience of working with other directors on their projects, I’ve had some really good mentors in terms of what it takes to deliver a film, not only as a director, but as a producer.

I’m not sure this film will have the same following as the films of John Hughes, but I think it will find a special place in the hearts of many. I still remember the first time I saw SLC Punk! and remember how much I loved the film. I think that My Summer as a Goth will find a place in many people’s hearts, just as SLC Punk! did in mine. Even now, in my late 30s, My Summer as a Goth felt familiar and comfortable. It had a touching, slightly nostalgic feel mixed with laughter and a great story about finding yourself in a crazy world.

Making this film was the greatest joy of my life, and set the bar high for future projects! Our cast and crew was incredibly skilled, professional and supportive. Filmmaking is naturally high-tension due to the time limits, etc. but the work on our set always flowed smoothly. I’m so proud to have worked with such amazing and diverse people, including an almost all female/ non-binary camera team and female director! This film is many years in the making, and I’m thrilled you’re finally available to watch from the comfort of your home.

When someone tells you that working on a film was the greatest joy of their life, I feel like that means something. We’ve all read horror stories of bad experience on set and actors clashing with directors. Tara mentioned how Fayra and Jonas really cared for the teens on set and I could hear the passion in her voice when she spoke of the film. From the quote above, Natalie clearly loved the people she worked with and the experience she had. When there’s that much love for a project, it shows in the end result. The attention to detail in each scene, the delivery of each line, and the framing of each shot play beautifully to tell this story… a story that everyone should see.

My Summer as a Goth is available on Demand and Digital on November 11. 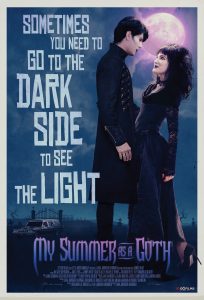 Movie title: My Summer as a Goth

Movie description: My Summer as a Goth is a coming-of-age story about the sometimes painful—often entertaining—search for identity and love in adolescence. After the sudden death of her father, 16-year-old, Joey Javitts is sent to stay with her eccentric grandparents while her author mother promotes her latest novel. Joey promptly falls for the beguiling Goth boy next door, Victor, and is transformed by him and his merry band of misfits in black. Set in present-day Portland, My Summer as a Goth navigates Joey’s relationships with her new friends, her family and herself, and will resonate with anyone who survived the social alienation of adolescence—and that first summer heartbreak.