We have a new entry in the Home Alone franchise. As far as my wife and I are concerned, there are only two films in the franchise – the original 1990 Home Alone and the (possibly better than the original) 1992 sequel, Home Alone 2: Lost in New York. As far as we’re concerned the subsequent 3 films were never made as they are an insult to the original films. Then again, maybe it’s an age thing. I love Ewoks and I hate Jar Jar Binks and Porgs… but I’ve been told that’s because of the age at which I was introduced to them. I disagree and feel that Ewoks are vastly superior to both Jar Jar Binks and Porks, but I also feel the first two films in the Home Alone franchise are vastly superior to the remaining films. That said, we should probably give this 6th film in the franchise a fair shake given that it brings back Buzz (Devin Ratray).

It is interesting to break down Home Sweet Home Alone and compare it to the other films in the franchise. It isn’t either of the first two films, it’s not even close, but it is much better than films 3, 4, and 5. The film sets itself up in a completely different way, but exists in that original Home Alone universe.

In this film, we have Max Mercer (Archie Yates) as our replacement for Kevin McCallister, but the setup for how he is left home alone is rather similar. His mother, Carol (Aisling Bea) and the rest of his family are going to Japan for the holidays and looking to get away from the family and out of the noise, he falls asleep watching videos in the car in the garage. Due to a booking mishap, the rest of the family leaves and he finds himself home alone. Instead of finding himself up against a pair of bumbling criminals as a replacement for the Wet Bandits, Max finds himself going toe to toe with Pam and Jeff McKenzie (Ellie Kemper and Rob Delaney). A husband and wife with kids of their own who are in the process of selling their home due to their employment situation when they find out a valuable family heirloom could save their home. An heirloom that Max was looking at during their open house.

What results is a lot of hilarious slapstick comedy. Does it have the heart of the original films? Nope. Is it entertaining and mindless holiday fun? Definitely! I tried to keep an open mind watching the film, my wife, on the other hand, hated Max with a passion. He wasn’t Kevin, he stole from the McKenzie’s, he was “a little brat.” I wanted to give Max the benefit of the doubt. I wouldn’t want to be in that situation and there were definitely events that drove him to the actions he takes. I don’t think either side was truly innocent but you have adults vs child and it’s hard to be anti-child… unless you’re my wife, who really just wants a new Home Alone film with Macaulay Culkin.

At the end of the day, the film has a number of nods to the original films which I appreciated along with a number of updated home defenses that I thought were really cool and creative. The film is fun and it is entertaining. If you go in expecting one of the first two films, you will definitely be disappointed but if you go in expecting something entertaining and set in the same universe, I think you’ll likely enjoy yourself. They definitely set the film up for a potential sequel, so I think we’ll probably see more of this universe in the future and that means more potential opportunities for Macaulay Culkin to return. 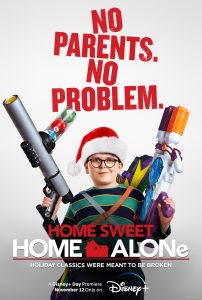 Movie description: 20th Century Studios’ “Home Sweet Home Alone” is an all-new adventure comedy from the beloved holiday film franchise. Max Mercer is a mischievous and resourceful young boy who has been left behind while his family is in Japan for the holidays. So when a married couple attempting to retrieve a priceless heirloom set their sights on the Mercer family’s home, it is up to Max to protect it from the trespassers…and he will do whatever it takes to keep them out. Hilarious hijinks of epic proportions ensue, but despite the absolute chaos, Max comes to realize that there really is no place like home sweet home.

I was 9 years old when the largest hostage rescue operation in American history happened. It took place on April 4, 1991 in Sacramento, California when 4 gunman took hostages at a Good Guys! electronics […]