I’ll be the first to admit that this movie was not for me… I like movies with a story and I didn’t really feel that this movie had one. Sure, there was a premise – girl goes missing and a small town is affected by it – but this was more of a character study and that’s not something that typically catches my attention. When I saw the description of the movie, I was pretty excited, but the emotions that they described weren’t realized in the film. It was weird, it was very different, but I don’t know that I’d call it good. I suspect that there’s a subset of the population that will enjoy this movie… I’m not sure who, but I know they’re out there because I’ve seen plenty of good reviews of this film. While I typically steer clear of reading other reviews, I wanted to see if others shared my opinion. I don’t want to scare anyone off this film, so I’ll talk about the parts that I liked and let you decide if that’s enough to explore it on your own.

The first thing worth mentioning is the casting… the actors were all quite talented. While I didn’t enjoy the story (or lack thereof), I did enjoy the performances. The stand outs were definitely the three mothers – Kate Arrington as Renee Darlington, Marika Engelhardt as Lisa Harper, and Audrey Francis as Lynn Kitzmiller. All three of these women were completely believable in their roles and were incredible with Engelhardt and Francis going above and beyond in some scenes. They could easily teach a master class in character portrayal.

The second thing worth mentioning is the humour. While I didn’t laugh at lot, there were a few times that I did laugh out loud. Typically, these were one liners that caught me off guard. I won’t share details because I don’t want to spoil it for those brave enough to watch this film, but one that stands out in my mind compares the male anatomy to E.T. and I thought that was genius.

Finally, the best part of the film… the music. The movie was filled with a cappella versions of 80’s songs. They were amazing and the scenes they were used in were pretty awesome. One of the performances that really stood out to me was Promises Promises. The songs, performed in this style. were hauntingly beautiful and I do think the movie was worth watching just for these performances. While I doubt I would add this film to my collection, I would love to buy the soundtrack on vinyl.

I appreciate what I think was the goal of the film, it just didn’t resonate with me, but I feel that it’s important for readers to have an understanding of what the intention was, even if I couldn’t see it. Here’s what Jennifer Reeder, the film’s writer/director, had to say:

I tell stories about unruly women and the landscapes they transform. This is a story by a woman that proposes girlhood as a place of transcendence and transgression. I am committed to this voice and to producing unexpected narratives. I write scripts from actual experience and observation and my films are specific in mood and perspective. I am influenced by Ohio, where I grew up—all that sky and flatness. And even more so by the Midwestern people and their kind of everyday destructiveness and determination to cope. This awkward emotionality is evident in my films as scenes unfold like sticky flypaper and characters make one small mistake after another.

At the end of the day, I don’t know if you should even listen to what I write because I didn’t enjoy it… if the director’s words resonate with you or if you’re a fan of David Lynch, then you should probably check this out. It just wasn’t for me. 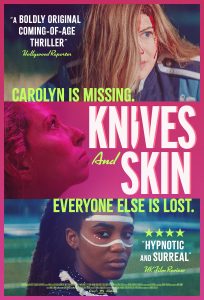 Movie description: What happened to Carolyn Harper? Part suburban nightmare, part neon-soaked teenage fever dream, this tantalizing mystery traces the wave of fear and distrust that spreads across a small Midwestern town in the wake of a high school girl’s mysterious disappearance. As the loneliness and darkness lurking beneath the veneer of everyday life gradually comes to light, a collective awakening seems to overcome the town’s teenage girls—gathering in force until it can no longer be contained. Unfolding in a hallucinatory haze of lushly surreal images, Knives and Skin is a one-of-a-kind coming-of-age noir that haunts like a half-remembered dream.