I wasn’t sure what to expect with Buffaloed, the name is interesting and the premise seemed odd, but I enjoyed Zoey Deutch in Zombieland: Double Tap, so I decided to watch it. I’m really glad that I did. The film was quite entertaining and made me laugh a number of times. Deutch and her co-stars – Jai Courtney, Judy Greer, and Jermaine Fowler – did a great job.

The film takes place is Buffalo, hence the name, and looks at the debt collection business. Deutch stars as Peg who is always looking to get rich. Her initial cons land her in jail and after her release she gets a job as a debt collector. There she meets Wizz (Courtney), the king of debt collection and typical underworld thug. He teaches Peg the debt collection game, how paper (debt) moves through the system, and she takes what she learns and starts her own competing business. Much of the film covers the competition between then. The ever escalating antics are interesting and rather amusing at times.

One of the more interesting aspects of the  film is the love of chicken wings. I think this was a really fun nod to Buffalo. When they were first featured it was good for a laugh, but the ongoing debate between Duff’s and Anchor Bar creates some amusing scenes. The judge is, by far, one of my favourite characters for his love for chicken wings.

Typically, when I watch a film, I find it easy to write about. This one, not so much. The film was such an interesting and unique concept that I feel like discussing it too much would spoil it. It was definitely a lot fun and something I really enjoyed. Deutch’s character is a great character study and she makes the film. Without her performance, I suspect that this would be a mediocre film with a decent story, but she brings everything together.

While this won’t be the best movie this year, I think you’ll be entertained. So check it out. You won’t be disappointed. 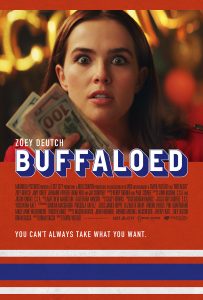 Movie description: Buffalo is the debt collection capital of America, though Peg Dahl (Zoey Deutch) never saw herself in that world. She's bet on her sharp mind—and even sharper mouth—to get her out of town and into an Ivy League university. But when an acceptance letter to the school of her dreams arrives, she quickly realizes the cruel impossibility of paying tuition. A chance phone call changes everything and leads her into the lucrative yet complex and shady business of delinquent debt collection. She's a natural and soon running her own shop, but at what cost? Also starring Judy Greer, Jai Courtney and Jermaine Fowler, BUFFALOED is a hilarious and timely comedy about one woman rewriting the rules of The Man's game.

We Summon the Darkness

To say that I love cheesy horror, thriller, slasher type movies would be an understatement… it’s currently one of my favourite genres. So, when We Summon the Darkness first came to my attention, I knew […]

One of my favourite things about starting this website has been the discovery of films that I never would have considered watching and I’ve definitely discovered a few gems. LETO was one of those gems. […]