I’ve always loved William Shakespeare. My bookshelves are filled with copies of his work, analyses of his plays, and a set of his plays in magazines from more than 150 years ago. One of the most prized pieces of my collection is a copy of The RSC Complete Works of William Shakespeare that my wife gave me for our first anniversary. So, when the opportunity arose to review Ophelia, I jumped at the chance. The film is based on the 2006 novel by Lisa Klein and tells the story of Ophelia via a series of hypothetical thoughts that fill in the blanks in Shakespeare’s masterpiece, Hamlet.

The best part of this film is that you don’t need to know the story of Hamlet to enjoy it, it works as a standalone story. Although, it is definitely interesting and even amusing at points if you are familiar with Hamlet – particularly the scene between Ophelia and Hamlet with Polonius and Claudius spying from a distance. The whispers exchanged between Ophelia and Hamlet add so much context to their conversation that I don’t really care that this story is a hypothetical addition. I enjoyed the concept and outcome so much that I want it to be canon.

The film brings together an incredible cast including Daisy Ridley (Star Wars’ Rey) as Ophelia, Naomi Watts (King Kong‘s Ann Darrow) as Queen Gertrude, Tom Felton (Harry Potter‘s Draco Malfoy) as Laertes, and Clive Owen (Theo Faron in Children of Men) as Claudius. Daisy Ridley has been amazing in everything she has starred in and doesn’t show any signs of slowing down, and that statement is just as true for this film, her portrayal of Ophelia is amazing. The makeup and costume department deserves credit when it comes to Naomi Watts, who does double duty as both Queen Gertrude and Mechtild. It wasn’t immediately obvious, at least to me, that both roles were played by Watts. One additional note about the behind the scenes before we discuss the film, the set design really stood out to me as well, I thought the scenes were just beautiful and I have a strong desire to visit the Czech Republic, where the film was shot after watching this movie.

If I were to describe Ophelia in a word, I think it would be headstrong. This film takes a tragedy that features a woman who goes crazy and replaces it with a romance about a woman who’s willing to risk everything for the people she loves. The relationship she shares with Queen Gertrude is incredibly special and it is clear from the get go that she loves both her brother and her father. As she falls in love with Hamlet, she puts aside concern for her own well-being as she focuses on protecting their love. There’s much of Hamlet’s story that is well known and I’d rather not ruin the film by talking about the unknown aspects that this story introduces.

It’s worth looping back to Daisy Ridley one last time to talk about the roles she has played. I didn’t have a problem finding role models in film growing up, but there are powerful male leads everywhere in film. I’ve heard and read a lot about Rey’s importance as a role model for young women with her role in the Star Wars franchise. I think that Daisy Ridley may have been born to play these types of roles because Ophelia is strong and powerful, just like Rey. She may not have the Force, but she’s a force to be reckoned with.

I can’t praise this film enough and highly recommend checking it out. It’s in theatres on June 28 and available on digital and on demand on July 2. 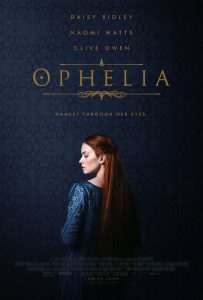 Movie description: One of the world’s greatest dramas is turned on its head through a bold and new perspective in OPHELIA. Set in medieval Denmark and spoken in a modern tongue with a poetic twist, it recalibrates the classic Shakespearean tragedy of “Hamlet” so that its unspoken, complex heroine may share her own story. As a rebellious and motherless child, Ophelia (Daisy Ridley) is taken into Elsinore Castle by Queen Gerturde (Naomi Watts) as one of her most trusted ladies-in-waiting. Soon enough, Ophelia captures the affections of the young Prince Hamlet (George MacKay). A passionate romance kindles between the two in secret as the kingdom is on the brink of war amidst its own political intrigue and betrayal. When Hamlet’s father is murdered and the prince’s wits begin to unravel into an insatiable quest for vengeance, Ophelia sharply navigates the rules of power in Denmark all while struggling to choose between her true love and her own life.