It’s hard to describe how I felt watching BlacKkKlansman. I’ve been slow to write this review because I’ve spent the past month digesting it. When I first watched the film, I wrote down “Powerful, Dark, Well Acted, and, at times, painful to watch.” I was horrified and shocked at times watching the movie, but the story was told very well, bringing in levity at just the right moments. I definitely have an interest in reading the book the film is based on after watching the movie. I also feel like I’d like to watch the film again, perhaps not in an apartment building where I’m constantly turning down the volume for fear of what my neighbours might hear and what they might think of me.

The cast members did an amazing job with this film, John David Washington and Adam Driver were amazing together, so much so that I almost forgive Adam Driver for killing Han Solo. Topher Grace did an amazing job, although it was uncomfortable seeing Eric Forman in that position. The fact that he was able to pull off that role is a testament to his acting ability, it was eerie to watch. Ryan Eggold, an actor I grew to love on The Blacklist, also does an amazing job in the film.

The film follows an African American police officer, Ron Stallworth, who is new to the force. At first he is stuck doing the shit jobs, but when the undercover team needs a black police officer to infiltrate a rally, Ron is given the opportunity to demonstrate his capabilities. He does such an impressive job that he is transferred to undercover, where he calls a KKK recruitment number in the newspaper and ends up befriending members of the KKK (first Walter Breachway and then David Duke)  over the telephone. When in-person meetings are required, Ron partners up with another officer, Flip Zimmerman. As the investigation continues, Ron develops a relationship with the very political (and very anti-police) Patrice Dumas, whom he met at the original rally. The investigation into the KKK reveals a planned terrorist attack that is thwarted just in the nick of time. It is intense and very well directed. When I look at this film compared to the others I watched this year, it wasn’t my favourite, but that’s a personal preference. I can, however, recognize why it is up for Best Picture and, while I haven’t seen every film nominated in the category, I feel like it most deserves to win out of the ones I have seen. I definitely recommend checking out this film. 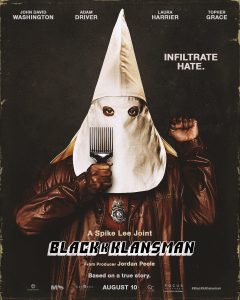 Movie description: Ron Stallworth, an African American police officer from Colorado Springs, CO, successfully manages to infiltrate the local Ku Klux Klan branch with the help of a Jewish surrogate who eventually becomes its leader. Based on actual events.