Revenge is, in the words of the director, Coralie Fargeat, “the story of the sloughing of a woman.” It is a dark, visceral movie described on Wikipedia as a “rape and revenge action horror film.” While not your typical jump out of your seat and sleep with the nightlight on horror film, the intense cinematography leaves you wondering if your skin will ever again feel free of creepy crawlies. Before we talk about the movie, we have to talk about Fargeat, who said, “Until now, this type of filmmaking has been made practically exclusively by men. REVENGE is my vision of a female director on the genre”, and the amazing job that she did with this film. The imagery is bold and fearless, the close up images of insects are still sending shivers down my spine well after I finished watching the film. I watched the movie alone and I still felt incredibly uncomfortable – so much so, that I almost had to turn the film off. It wasn’t just the rape scene, but the behaviour of Stan (Vincent Colombe) and Dimitri (Guillaume Bouchède) beforehand as they leered at Jen (Matilda Lutz). We also have to talk about Matilda Lutz. Her transformation from eye-candy mistress to a fearsome, kick-ass woman was incredible. If anyone needs to cast a new Sarah Connor anytime soon, Matilda Lutz should be the first name on the list, she definitely gave off a ‘Linda Hamilton as Sarah Connor’ vibe at times.

I’ve wanted to see this movie for a while. I subscribed to Shudder a while back for Mayhem (starring Steven Yeun and Samara Weaving) and saw their announcement for Revenge, which originally premiered at TIFF in 2017. The plot is pretty straight forward and easy to follow. A young, beautiful mistress to a wealthy, married man is raped by one of the man’s friends while on a hunting trip. The men attempt to buy her silence and, when that fails, eventually try to kill her to prevent their wives from finding out. It turns out that this young woman is harder to kill than they thought and she slowly extracts her revenge. For any potential viewers, it is important to mention that this movie is subtitled with a pretty even 50/50 split between English and French dialogue.

As I previously mentioned, I felt incredibly uncomfortable during the first act of the film. The director sets the stage well and Vincent Colombe may just give the creepiest performance I’ve seen in a while. As the movie progresses, there are a few standout scenes, including Jen’s wild ride on peyote during which she brands herself with a Phoenix while attempting to cauterize a wound. The camera work tied with Lutz’s acting (particularly the close-ups on her eyes) makes you feel like she really was tripping and you might be along for the ride. Another great scene involves Jen finally getting revenge against Stan, her rapist. I never thought I’d have to look away from the screen during a shot of someone’s foot.

While I feel that the movie did a wonderful job of evoking emotion, there were a few reasons that I knocked the rating down. The first was my desire to see more revenge, I would have liked to see the men suffer more than they did, although they ultimately all died, which I suppose was the goal. I also disagree with the musical choices and found that the film’s score, particularly the use of electronic music, was a detractor. I found myself pulled out of certain scenes and driven back into reality when the harsh electronic sounds would kick in. This may have been the goal of Fargeat, who said, “Music is the keystone of this hellish experience which grows more and more harsh and hostile. A repetitive and hypnotic score strongly tainted with electro which progressively puts one in a trance like those of John Carpenter, Etienne Jaumet or Thomas Banglater.” For me, however, anything that takes me out of the movie experience is detrimental and that happened several times.

At the end of the day, the movie was worth the time investment, if you don’t mind gory movies that leave you feeling like you need a shower. If nothing else, even if you feel like you can’t get past the subject matter or the visceral images, try and watch the movie just for Matilda Lutz’s performance. It was a home run. 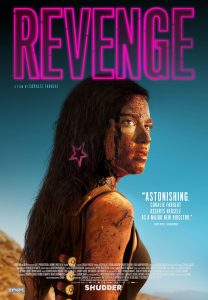 Movie description: Three wealthy, married family men get together for their annual hunting game in a desert canyon. But this time, one of them has brought with him his young mistress, a sexy lolita who quickly arouses the interest of the two others. Things get dramatically out of hand. Left for dead in the middle of a desert hell, the young woman comes back to life and their hunting game turns into a ruthless manhunt.