Growing up in Canada, and specifically Northern Ontario, hockey is a way of life. My bookshelf was filled with hockey stats books, my closet was full of hockey cards, and my parents froze in empty arenas because I had 7am practice. Over the years, hockey took a backseat to other things, but I’ve always loved the game. So, when the opportunity to review Goalie presented itself, I jumped at the chance. The film tells the story of Canadian hockey legend Terry Sawchuk. Unlike most biopics, this was a look at his life off the ice and paints a picture of a deeply tortured man. The film was written by Adriana and Jane Maggs based on a book of poetry written by their father Randall Maggs entitled, Night Work: The Sawchuk Poems.

The first thing to talk about is the casting. I’m not sure how they managed it, but they snagged Kevin Pollak to play Jack Adams, a hall of fame hockey player, coach, and general manager that spent most of his time with the Detroit Red Wings as head coach and GM. He built one of the greatest hockey teams to play in the late 40s and early 50s, with the likes of Terry Sawchuk, Red Kelly, Gordie Howe, and others. Pollak was joined in leading roles by Mark O’Brien (Republic of Doyle) as Terry Sawchuk and Georgina Reilly (Murdoch Mysteries) as Pat Morey, Terry’s wife. Mark and Georgina also happen to be married in real life after meeting on the set of Republic of Doyle. This stellar cast is supported by a heap of great Canadian actors – Sergio Di Zio (Flashpoint), Matt Gordon (Rookie Blue), and Jonny Harris (Murdoch Mysteries). I still think that Republic of Doyle, Rookie Blue, and Flashpoint are among the best television ever made, so I was really happy to see the cast they brought together for this film.

The film does a great job of showing how difficult life was for athletes in that time period. They weren’t the overpaid millionaires we see today, instead they worked for their money. These days the average salary is $2.4 million, but Gordie Howe, one of the greats, made only $25,000 (slightly more than $200,000 in today’s money) in 1959. In his early years, Sawchuk couldn’t even afford shoes and went home to work with his father in the off-season. At times, the shots of Sawchuk’s body and face are difficult to see, the hits and pain he endured is simply incredible and, when combined with depression, drove him to dark places. I can’t imagine the stress of being the only goalie helped with his mental health issues. Until Sawchuk joined the Maple Leafs, teams only ran a single goalie and no matter how many times he was hit with the puck, he had to get back up or risk being traded. I really enjoyed seeing this behind the scenes story of his life, but I have to wonder how realistic and truthful the scenes are… after all, this is a biopic and not a documentary.

On that note, there were some definite timeline issues that really bothered me with this film. Terry played with the New York Rangers for the 1969-1970 season, yet during this time they show the death of Jack Adams and the death of his mother, Anne. From a photo of Terry’s tombstone, you can see that his mother died in 1966, when Terry would have been playing with the Toronto Maple Leafs and Adams died in 1968, as Terry was ending his season with the Los Angeles Kings. These types of mistakes make me trust the accuracy of the materials presented, but I still enjoyed the movie.

One great aspect of the film is the opening scene, the dialog is an excerpt of the coroners report, which is expertly delivered by Sergio Di Zio and is the same introduction used by writer/director Adriana Maggs’s father in his book on the subject. We open with the coroner listing off the scars and damage to Sawchuk’s body.The report is interspersed with scenes of Terry’s body and face being battered over the years, which creates a gruesome opening that really throws you into the film. If you are interested in seeing just how much damage was done over the years, take a look at this piece over at time.com.

At the end of the day, the movie is worth the watch. I was fascinated and deeply enthralled throughout the film, which makes it a pretty easy recommendation. You can check out the film in theatres on January 31 or On Demand February 25. 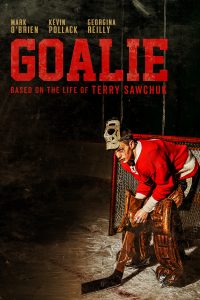 Movie description: The life of a professional hockey player was not always a glamorous one. For legendary goaltender Terry Sawchuk, each save means one more gash to his unmasked face and one more drink to numb the pain. Even with a wife and seven children at home, he is haunted by the void left from his childhood which he tried to fill with cheering crowds. Sawchuk traveled across the country racking up 103 shutouts and 400 stitches to his face, proving that this is a man who lives, breathes, and dies a goalie.

I saw Unbreakable for the first time shortly after its release in 2000. I remember loving the concept of the film and watching it quite a few times. When Split was released in 2016, I did […]

Jaw dropping. That sums this film up quite nicely. This movie is an electrifying wild ride from the opening scene with the awful CGI jet. I can honestly say that the horrible CGI in the […]