Watch Profile. That should be the entire review, but I’ll talk about the film a bit more just to convince you that watching it is the correct choice. This film is, without a doubt, a 5-star film. You are now asking yourself why I only gave it 4.5-stars. I’ll get to that, but, for the majority of people, I don’t think my hang ups will be your hang ups.

Profile uses director Timur Bekmambetov’s Screenlife format, which you may have seen previously in the films Unfriended and Searching. We’ll also hopefully see it in R#J, which premiered at Sundance earlier this year and will hopefully find a release. I’m already in love with Screenlife films and, as a huge Romeo and Juliet fan, I think R#J will be incredible. That said, we’re here to talk about Profile, a film based on the true story of journalist Anna Erelle who went undercover to explore the ISIS recruitment network. You can read Erelle’s story in the book, In the Skin of a Jihadist. Erelle is based in Paris and the recruiter she meets, Bilel, is also French-born. In the film, the story moves to England and the interactions play out between journalist Amy (Valene Kane) and ISIS militant Bilel (Shazad Latif).

The idea behind the Screenlife format is that everything is told on screen. You have Skype and Facetime calls, web browsing, social media, and instant messaging, but you are constantly looking at the screen of a device. While this sounds like it could be a little boring, it is a breath of fresh air. We’re surrounded by these flashing, high budget action films these days and a film that is all about storytelling with an interesting twist is a really nice change.

When it comes to the casting, the supporting cast is great, but Kane and Latif are the stars and they shine. One thing I really liked, reading the press notes, was that Bekmambetov insisted on casting via video and Skype, he wanted to meet the cast members the same way that you would and that was a brilliant decision. The actors make this film, particularly Kane, who’s IMDB page does not reflect how incredible she is on screen.

The film itself takes you into Amy’s mind as she plans her story, creates a fake profile, and waits to be contacted. While she is supposed to be gathering data on the recruitment methods for an article, she falls for her recruiter and is sucked into his world and his life. You may just be watching a screen, but the story will have you on the edge of your seat, waiting to see what happens next.

So, if I loved it and called it a 5-star film, why did I only give it 4.5 stars? I’m a stickler for details and I feel that there were a few things that production overlooked… things that I likely paid more attention to because I work in cybersecurity and write about digital privacy.  Here are a few of the technical inaccuracies that stood out to me, but note that these are the exceptions, for the most part they covered the majority of issues related to filming a 2014-based story in 2016 on a computer. I’m hiding these in a spoiler tag in case you don’t want to read them.

These were a few of the technical inconsistencies that I noticed… but there were other problems that I saw with the film as well… again they are minor points (again hidden in a spoiler tag):

Again, none of these were major issues – in fact, they are barely minor issues… but as the count started to grow, I knew that I wouldn’t feel comfortable rating the film at 5-stars, even though it will be for many people. I highly recommend watching this film, it truly is fascinating.

Profile will be released in theaters on May 14. 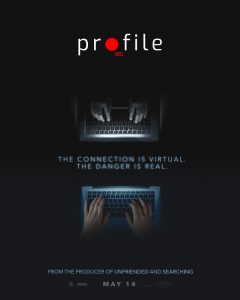 Movie description: Profile follows an undercover British journalist in her quest to bait and expose a terrorist recruiter through social media, while trying not to be sucked in by him and lured into becoming a militant extremist herself. The thriller is co-led by Valene Kane (Rogue One: A Star Wars Story) and Shazad Latif (“Star Trek: Discovery”). Profile is inspired by the 2015 nonfiction bestseller In the Skin of a Jihadist by a French journalist who now has round-the-clock police protection and has changed her name to Anna Erelle. The Berlin Film Festival and SXSW award-winning thriller plays out entirely on a computer in the Screenlife format, pioneered by Searching and Unfriended creator Timur Bekmambetov.

Have you heard the expression, “Do one thing and do it well?” It’s an expression that I wish writer/director Brea Grant had heard when she was writing 12 Hour Shift. I dislike checking multiple boxes for […]